A distant family member has been sending me questions about my beliefs. When he started doing this I confess that I often responded angrily because I sensed accusation in his questions. My sense is that he thinks that because I’m a pastor I should believe the same things he as a conservative Christian believes. For me, I just remember all those conservative Christians of my youth who made sure to let me know that I was not acceptable to them and thus to their God. This no being accepted was due to my family circumstances and a general “you’re not living a godly life” accusation. We don’t really know each other (live in different parts of the country). The organization to which he refers is the Democratic Party

The most important question I had was about your support for an organization that promotes killing the unborn. I don’t understand how that can be justified especially by a pastor; can you help me understand that please? When I think about these two issues, I wonder if Jesus is more grieved by racism in this country or the legalized taking of innocent lives of the unborn.

Dear _______,
I have to confess that in re-reading through the discussion up to this point I hadn’t noticed that in addition to saying above that the Democratic Party “promotes killing the unborn”, you stated that I thought abortion was an effective means of birth control. I never said that.
What I did say is something to the effect that I am amazed that some people who claim to be against abortion are also, when you get into the details of their positions, against the use of birth control. It makes no sense to make it difficult, or impossible, for women 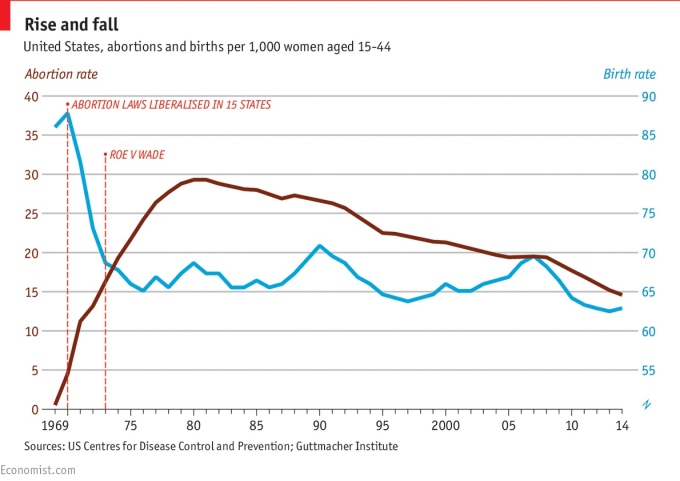 to obtain what they need to prevent unwanted pregnancy. More pregnancies will only lead to more abortions. This leads me to conclude that many so called “right to life” people are actually just against the freedom of women.
I start with this because in the last month “The Economist” published a chart from the CDC that shows that abortion is now at a lower level than it was before Roe v Wade. How has that happened? According to the accompanying article:

A study published last year in the New England Journal of Medicine found that this pattern was probably behind a decline in the abortion rate of a similar magnitude between 2008 and 2011. In turn, it attributed the falling numbers of unintended pregnancies to increased use of contraceptives. During that period, birth and abortion rates dropped in tandem. Data on unintended pregnancy rates are not yet available for 2011-2014, but the authors suggest this may be a continuing effect. (http://www.economist.com/blogs/graphicdetail/2017/01/daily-chart-16)

As to me “supporting an organization that promotes abortion”
There is a difference between saying that women have the right to make decisions regarding their own bodies, while also working very hard to provide women access to full reproductive care and “promotion of abortion.”
I don’t know one person who promotes abortion and I know a lot of people who are far  more strident than me. The reality is that whether legal or not abortions have happened and will continue to happen. I don’t know statistics but I have read tragic stories of women who found themselves in desperate situations. I have also read firsthand, heartbreaking accounts of women who, for reasons of health, have had to undergo an abortion. These women were celebrating the pending arrival of a child only to discover that something was incredibly wrong. I will err here on the side of compassion.
As a human being I value life. I don’t limit that valuing of life to the fetus and this is why I think that those who claim moral superiority are in many ways morally repugnant.
This is what I believe:

Getting back to your question about how I can support an organization like the Democratic Party. I am actually registered to vote as unaffiliated. Prior to that I was registered to vote as a Republican. It was through my study of scripture, prayer, seminary studies (at an Evangelical seminary), and immersion in a community other than white suburban middle class that I came to the realization that the Republican Party is “pro-life” in name only. While not all Republicans may feel this way, the party’s policies are pro big business and their message is one of disdain for people of color, poor people, women, and religious minorities.
So while you may not approve of me and my beliefs “as a pastor” I know that I am right where Jesus wants me to be.
May the peace of the Lord be with you,
Nancy