“In further studies, they found that weight loss, both in people who are lean and obese, triggers a powerful suite of biological and psychological responses that work together to restore the lost fat… In effect, substantial weight loss triggers a starvation response, whether a person is lean, overweight, or obese—and this response continues until the fat comes back.”
From “The Hungry Brain: Outsmarting the Instincts that Make Us Overeat” by Stephan J. Guyenet, Ph.D., page 129

The above quote from “The Hungry Brain” isn’t very encouraging at first look. But on further reflection it’s helpful for anyone who has struggled with the up, down, then up again (sometimes higher) of weight loss and weight gain because it helps us to understand the real struggle.
Most of the people I know who’ve battle obesity don’t struggle because they don’t know what to do. I’d venture to guess that most overweight people are very well versed in the world of diet and weight loss. 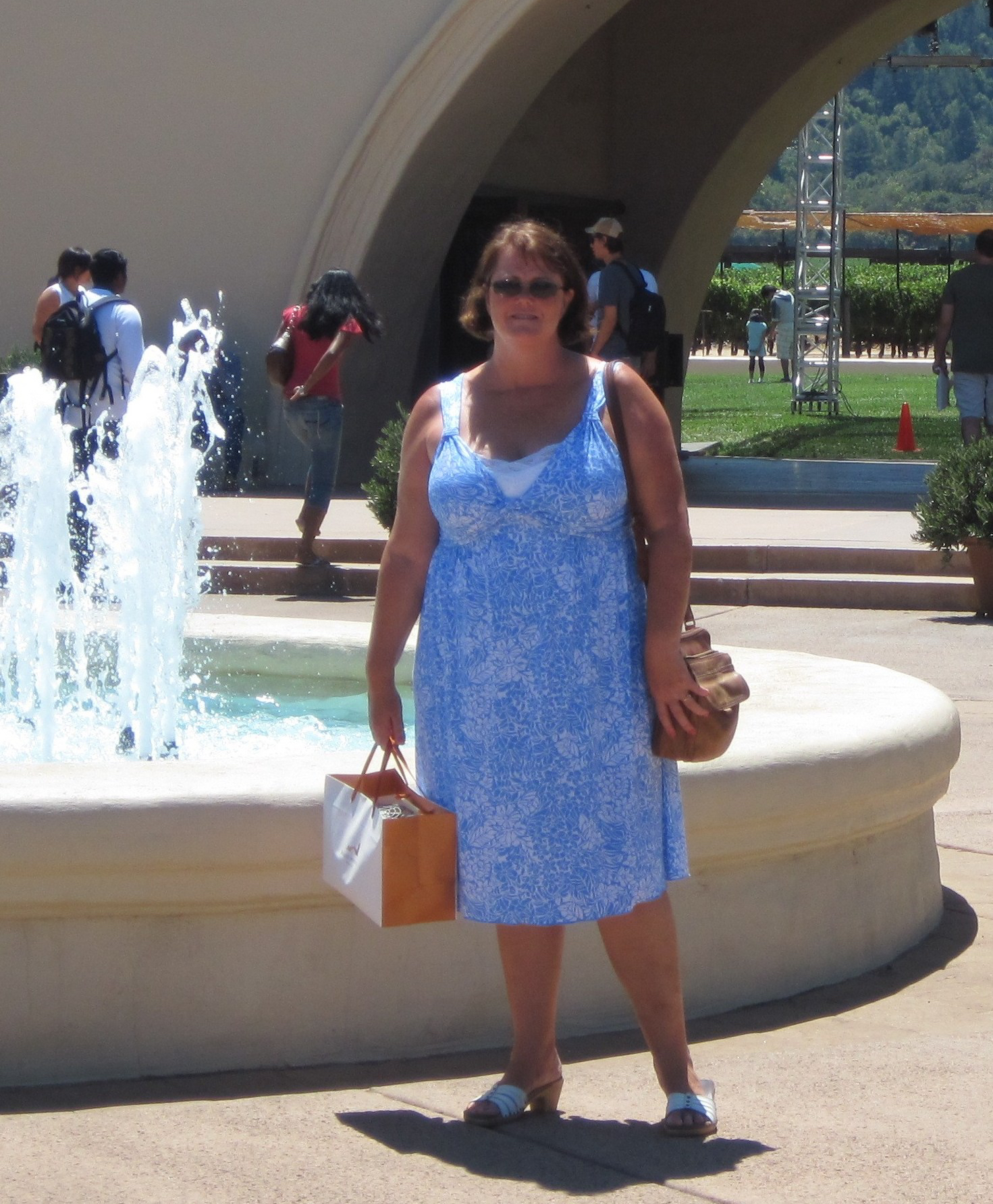 Me in Napa in July, 2009. I was not at my heaviest but probably pretty close to it. 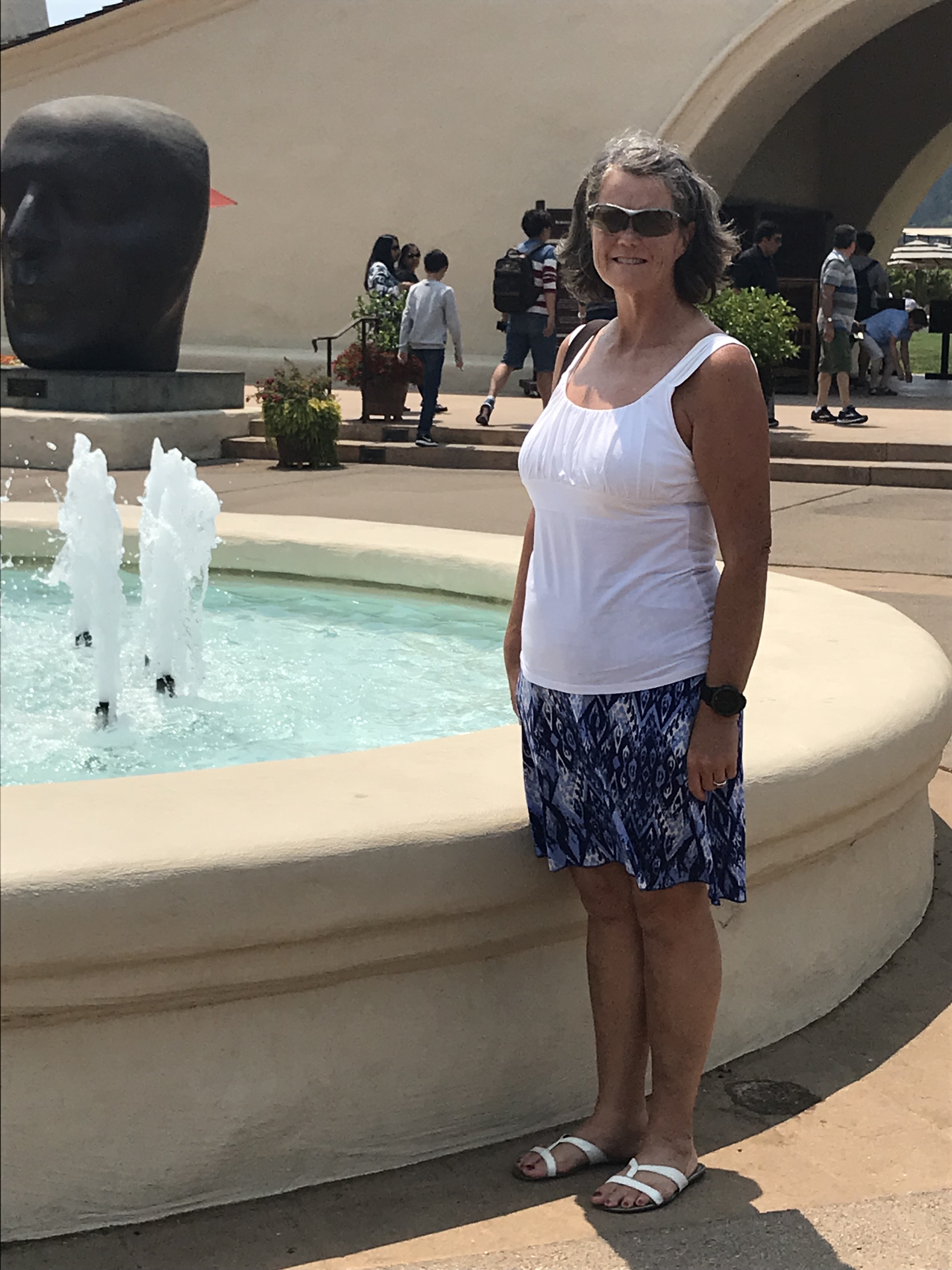 At the same winery this year. This is a more fit and healthier me…and I plan to stay this way!

I’ve personally tried most commercial as well as fad diets out there. I’ve read countless books. I’ve joined various programs. When I look back at the past 40 years (I’m 55 and remember dieting as a teenager), I’ve probably lost and re-gained hundreds of pounds. It’s probably not a stretch to say that maintaining a weight, any weight, is not something my body has much experience with. My actual experience has been down, then up a bit more than where I started…down again, followed by a bigger increase and so on. This led to my highest weight of at least 250 pounds in 2012. It was probably more than this, but I quit stepping on the scale.
I’ve been at my current weight for two years. Well, I’ve gone up and down within a 10 pound range in that time. It’s been a struggle! A year ago I hit my lowest weight of 163 – an 87 pound weight loss! Maybe it is no coincidence that I also had the best half marathon ever in terms of how I felt. It wasn’t my fastest because it was up lots of hills but it was awesome! (I Can Run Hills! A Recap of the The San Francisco (First) Half Marathon)
But I was unable to maintain that weight, even though my desire had been to get to at least 155 so that I would no longer be identified a “overweight” according to the medical world. Over the past year the pounds have slowly come back so that today, after a wonderful vacation that was fill with activity I weighed in at 174.4. An 11 pound gain in one year! At least I can still say I’ve lost 77 pounds.
I share this because I want to let people know that the struggle is real and I want to help myself and others to find peace with themselves, regardless of weight. Sometimes this peace is elusive, because there is a great deal of shame associated with weight gain. We tend to look at the person who struggles with their weight as someone lacking will-power, restraint, or even self worth. But it is far more complicated than that. Our bodies are far more complicated than that.
In “The Hungry Brain” Stephan Guyenet, shares years of obesity research that is both demoralizing and hopeful at the same time. Demoralizing because he clearly shows just how difficult it is to fight our own brains… in the often futile effort to maintain weight loss. But then it is hopeful for the same reason. If it’s not solely about will power then we can remove the sense of shame, while also making changes that can be helpful.
For Guyenet, the one answer lies in “Restricting Reward.”

High-reward foods tend to increase food intake and adiposity, whole lower-reward foods tend to have the opposite effect. This suggests a weight management ‘secret’ you’ll rarely find in a diet book: eat simple food. The reason you’ll rarely find it in a diet good is that, by definition, lower-reward food is not very motivating. It doesn’t get us excited about a diet, and it doesn’t make books fly off the shelves. We want to hear that we can lose weight while eating the most delicious food of our lives, and the weight-loss industry is happy to indulge us. The truth is that there are many ways to lose weight, but all else being equal, a diet that’s lower in reward value will control appetite and reduce adiposity more effectively than one that’s high in reward value.

I like the use of the word “reward” in this context. We can think of food as a reward and when we do it is usually very tasty calorie dense food. Or sometimes it is that salty-crunchy-sweet snack that we turn to in times of stress – tortilla chips are my particular weakness here.
But we can also think of other rewards. Rewards like feeling good and being able to move can impact us far more than can the immediate gratification of something we eat.
And still it is hard! Personally I will clean up my diet, eliminating those unhealthy foods that have crept back in… and I will continue to run and strength train and maybe even start bicycling once in awhile…I can easily do these things because of the rewards of fitness!
If you would like to share your own struggles, please feel free. There is strength in community and that is another reward that far surpasses any food!
To read past posts on this topic:
That Weight Struggle – Weekends
That Weight Struggle – Environment
The Never-Ending Struggle with Weight
What Happened to Healthy Eating? Boston Marathon Training – Week 1
Body Image – Gratitude 8/10Slow & Steady – Racing Weight Week 4
Really?!?! Racing Weight Week 3
Ummm – Racing Weight Week 2
OOPS – Racing Weight, Week 1
Racing Weight – Getting There