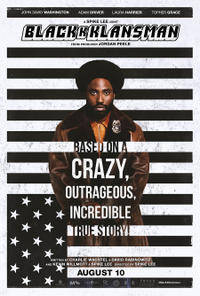 I’m not a movie critic. Sometimes when I read what others have written about movies, my own thoughts seem to be so inadequate. Maybe if I saw more movies, and then chose to review them I’d get better at it. But then, life as a movie critic is not my job.
My current job is both a job and a title, Pastor. Specifically, pastor in a Lutheran Church that is part of the Evangelical Lutheran Church in America (ELCA). We are one of the (if not the most) whitest denominations in America. The synod of which I am a part (Los Angeles and surrounding counties) is the most diverse, something to be proud of. But my congregation is not one of those diverse congregations I am sad to say. I am a white pastor in a majority Mexican immigrant city. I speak some Spanish and am continually working at it. But so far, my efforts to lead us to being a more diverse church have had limited success. This is just a bit of my context.
Today, for Labor Day, I went to see BlackkKlansman. It was a powerful movie. It bridges the past and the present in such a way that it is impossible to close our eyes to the ongoing evil of white supremacy in our nation.
I don’t use the word “evil” lightly. It was evil to kidnap and subsequently enslave people. It was evil to keep their children as slaves. It was a most horrible evil to sometimes rip children from the arms of their parents so that they could be sold again. Slavery in this nation was done under the guise of Christianity, my religion. This was evil.
This was not the subject of the movie. But I couldn’t help to think of it because this sin of slavery is at the heart of the racism that we continue to live with today.
BlackkKlansman is a story that is based on a memoir. I don’t know what of it is true memoir and what is added story telling.
An uncomfortable, for me, aspect of this story was the juxtaposition of scenes depicting calls for white power alongside demonstrations with calls for black power. I am uncomfortable because I often wonder how we will ever progress. The story also almost allows us (white people) to tell ourselves that we aren’t part of the KKK and thus we are not racist. It touches on the institutional aspects of racism but even there, it depicts a racist police officer rather than a system that is biased against people of color. Alas, there is too much to cover in a single movie.
As a pastor, I continually preach that we are allcreated in God’s image and that means us all people. I also lament the fact that too many of my fellow (white) Christians don’t seem to be able to see this beauty in all of God’s creation. I often wonder about my place among Christianity, because it seems as if the most vocal proponents of my faith are also vocal proponents of white supremacy. Even if they don’t use those words.
I’ve heard arguments along the lines of, “no, that is not us, but we just want everyone to get along.” But then the next line of the conversation is to attack Black Lives Matter as a terrorist organization. I don’t know how many times I have tried to explain the reason the Black Lives Matter movement is necessary.
I once had a very long dialog with a distant family member. He is an evangelical Christian and he had no desire to learn about why people are protesting. It was easier for his to condemn the protestors as members of a hate group. I went so far as to try and find people in his city for him to meet and to learn from. But once I made this step, it became clear that he wasn’t interested in learning. It turns out that he was just trying to figure out how “unchristian” I am because of my “liberal” positions. The conversation ended with his telling me that he’s learned a bit about ELCA Lutherans and it appears that I am where I belong (not a compliment from his perspective), and that he would pray for me. I wanted to scream that I don’t want these prayers. I didn’t scream, but I did say that instead of praying for me, maybe he could pray to see.
I’m tired and I’m white and I’m privileged and I’ve not done enough and I’m not doing enough and I’m tired.

I cannot imagine how exhausted my Black sisters and brothers must be in living with the structural racism that is so much a part of our culture. It is like the air we breathe. Don’t believe me? I suggest you read, starting with “Stamped from the Beginning: The Definitive History of Racist Ideas in America” by Ibram X. Kendi. If anyone reading this would like to read this book as a group – in person gatherings or online, please let me know. I think we could learn a lot together.
Our learning the history of slavery, segregation, and racism from times past until now is necessary for us to be able to see the truth that is all around us. We need to learn so that we can see and so that we can work for a better today and a better tomorrow. I don’t believe that it should be the responsibility of our Black citizens to get us white people to change. It should be up to us! It is our continued collective sin in burying our heads as we try to say, “that’s not me” or “that’s not us.”


Letter From Birmingham Jail is included in this book

As I think of this I am reminded of the Rev. Dr. Martin Luther King Jr. and his “Letter From Birmingham Jail.” I’ve often said that if I could, I would add this letter to the canon of scripture. I don’t’ have that ability, but I can still use it in matters of faith. And as I think about this movie, and the state of affairs in our country today I am reminded of his calling to account of the “white moderate.” For Rev. King, the moderate was in many ways worse than the overt racist because the moderate just went along with the status quo. This was not helpful then and it is not helpful now.
Well my friends, this was definitely not a review of the movie! Please see it. Please read what our sibling of color are writing. And please know that the God that I know is a gracious God. This God calls us to love our neighbors as ourselves. All our neighbors. It’s not easy to do but it starts with opening our eyes to see.
This pastor hopes and prays that we will.
nlswitz@me.com2018-09-04T14:20:02-07:00