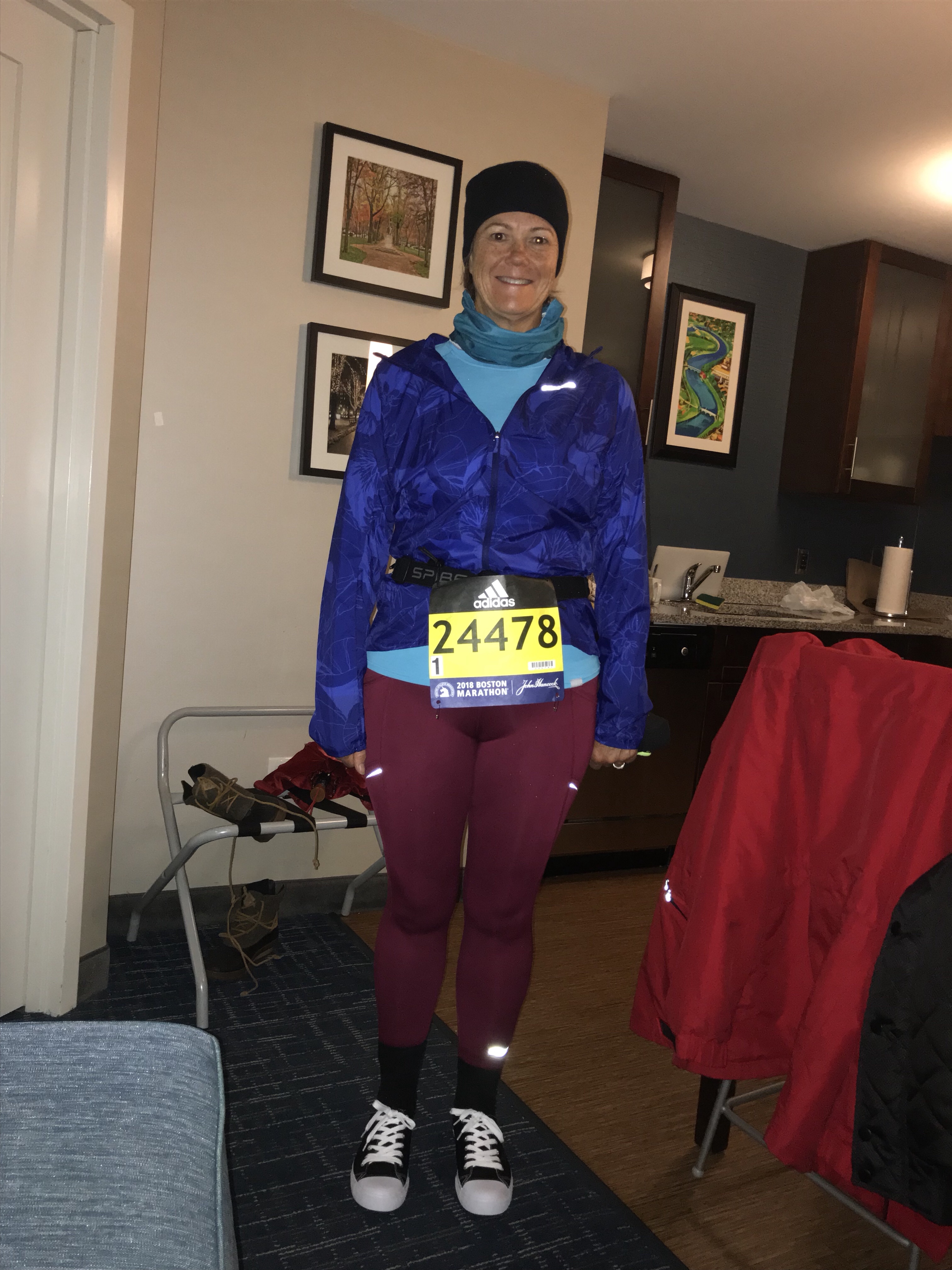 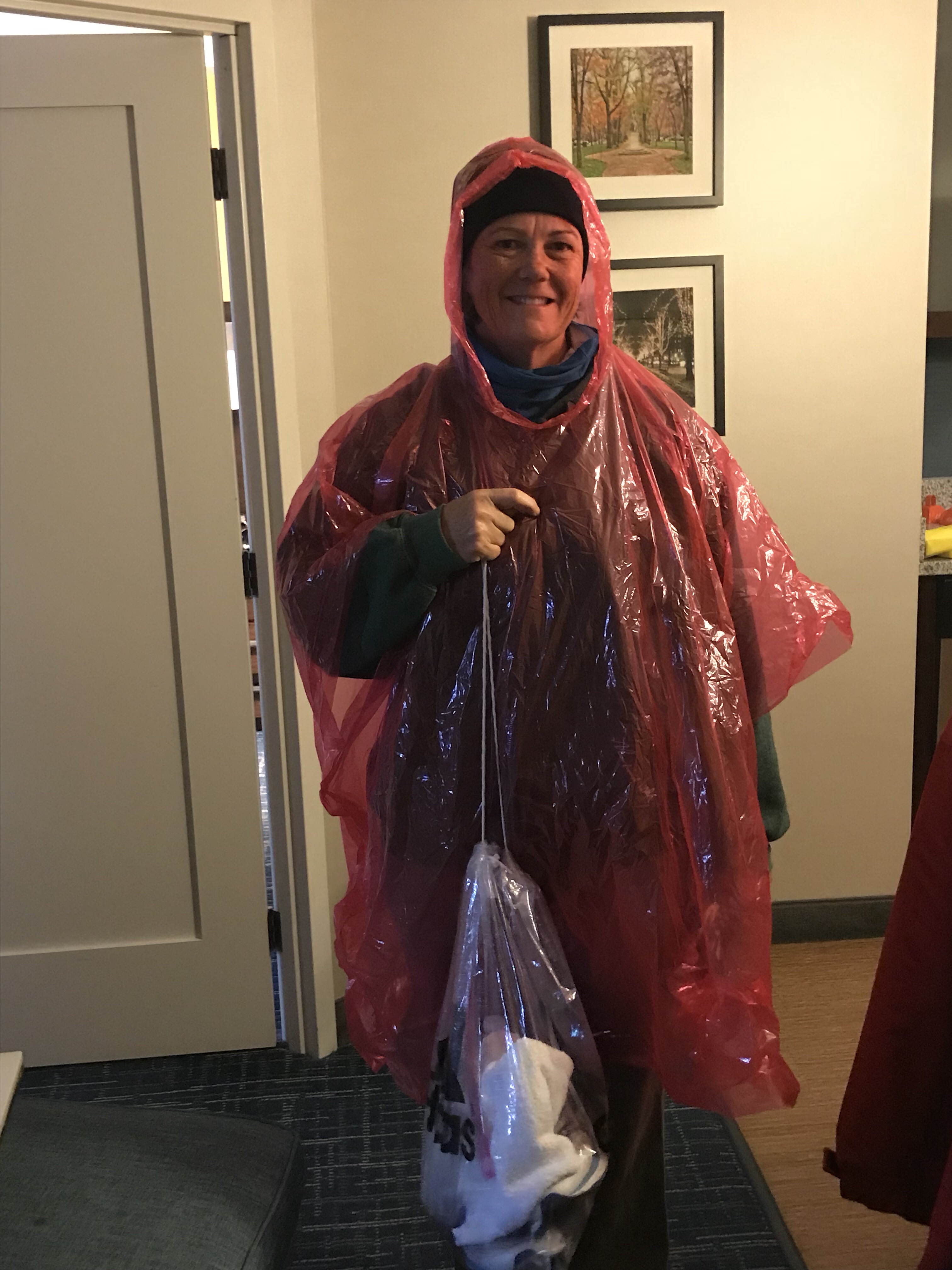 Living my entire life in Southern California, it is entirely reasonable to hold out hope for a change in the weather, one in which the predicted storm was pushed away by the high pressure system that sets itself up off the coast. It is common for the predicted storms to move north and miss us. So I held on to a tiny bit of hope that the weather wouldn’t be as bad as promised. But Boston is not SoCal and the storm did not get pushed away. 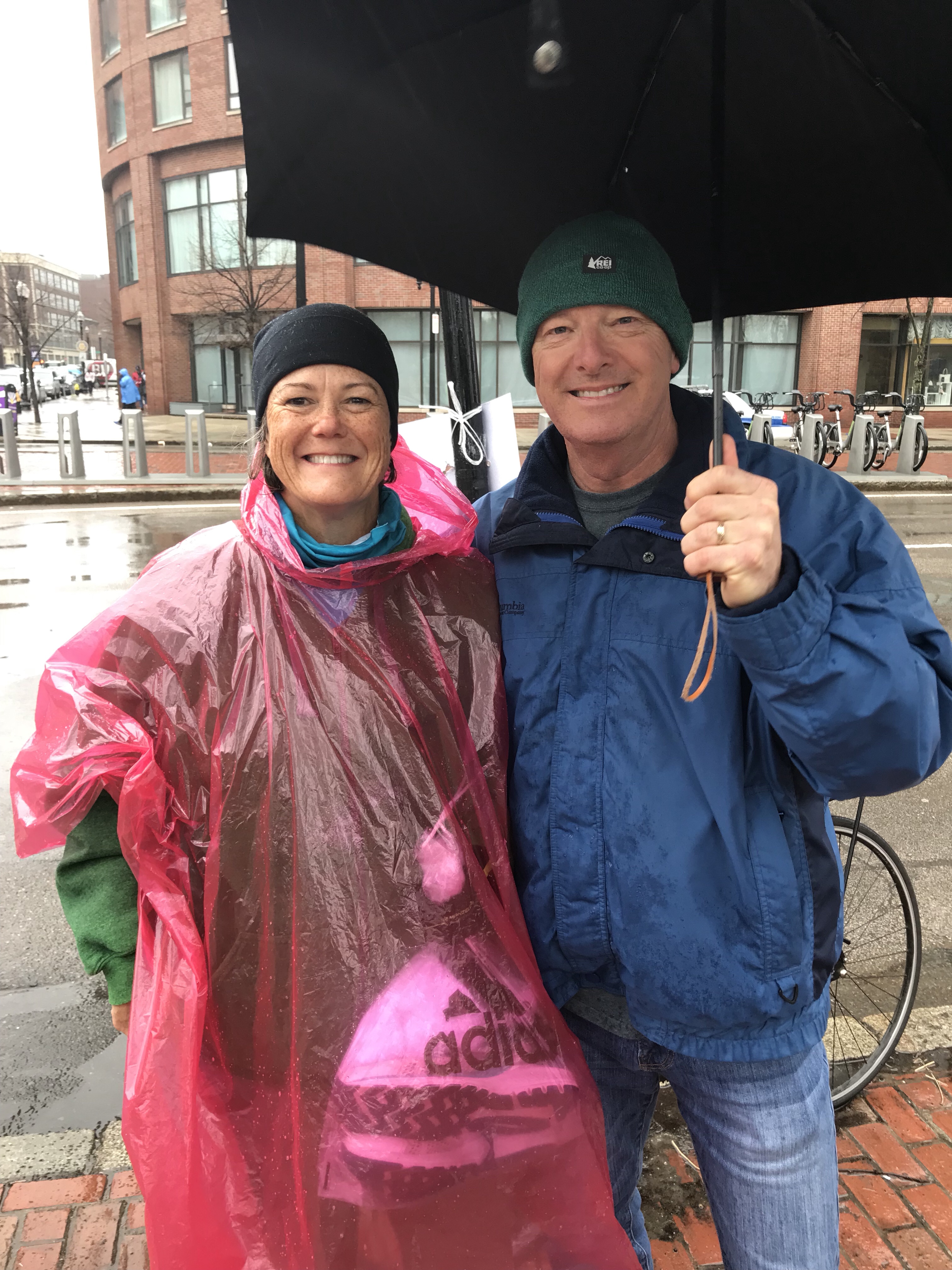 After relaxing down in the lobby/breakfast area of the hotel (Boston Marathon Day – A few morning thoughts ), I dressed with all my new gear (My First Boston Marathon – It was all about the gear – Pre-Race Recap). Scott came with me to Boston Common which was the bus stop. We chatted with a guy from New York while on the T (subway). He was running in honor of his mother who died exactly one year ago. He took a photo for me, and then Scott returned to the hotel. Thankfully the bus area was well organized and we boarded quickly.
I couldn’t see much on the drive because of the water on the windows outside, and the fog inside. I ate my SuperHero Muffin and watched Twitter feeds for the professional women’s news since their race had already started. Go Desi! 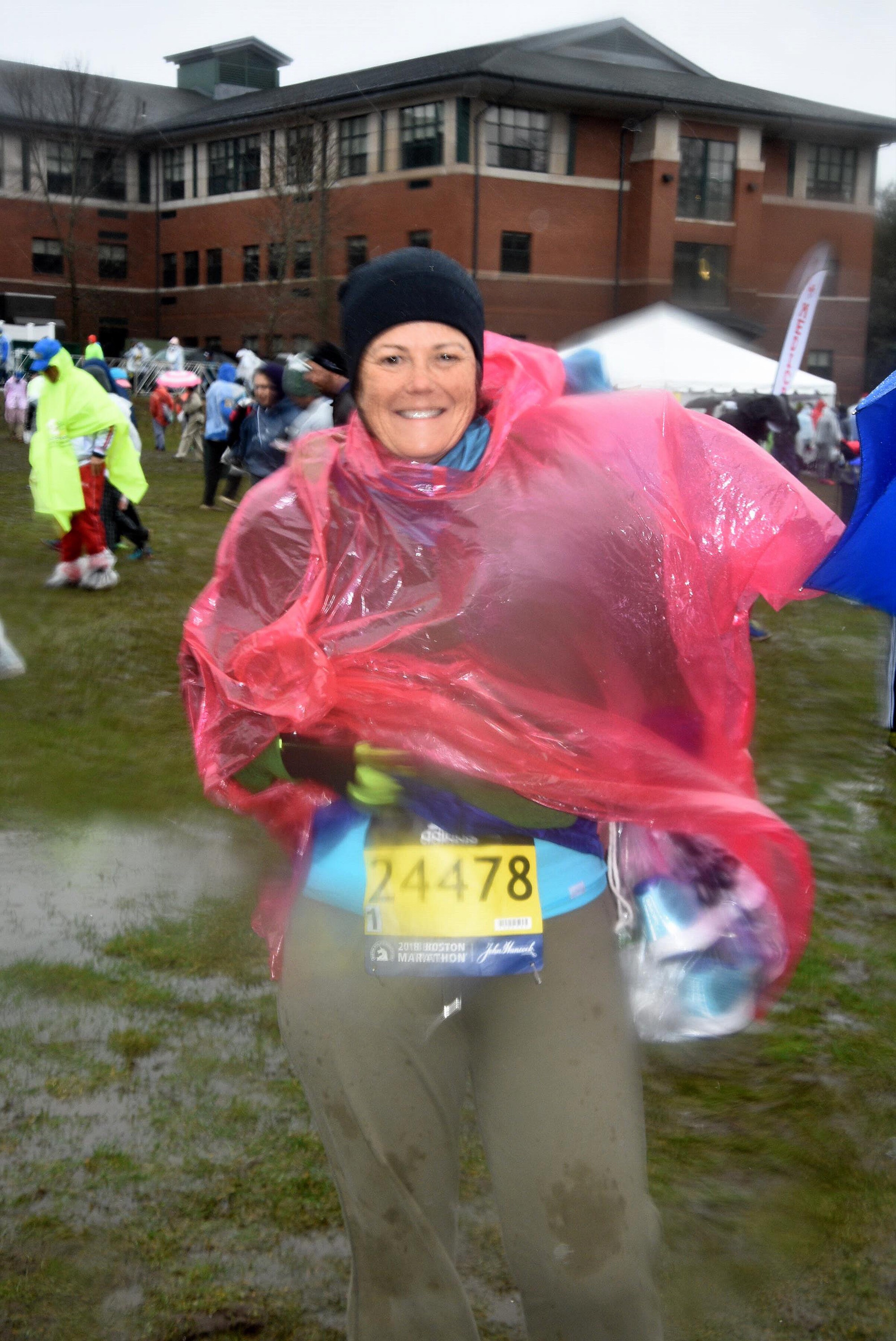 Once we arrived, we got off into torrential rain. Walking in to the waiting area I saw the perimeter of porta-potties and headed that way. OMG! I should not have done that…mud and water greeted me and everyone else. I was so so so thankful that I was wearing my give-away shoes. So many runners near me were sporting horribly wet and muddy shoes. A race photographer took my photo…You can see that the pink and cheap rain poncho was too light for the wind. I ditched it way sooner than I thought I would.
Getting off the wet, soggy, muddy field required a very short climb. I tried to step on what was left of the grass but still slipped towards the top. Someone offered to help me up but once I got me feet on something semi-solid I was ok…just had some very muddy hands. I joined the slow moving group of people who were making their way to the start. Looking at my watch we were less that 15 minutes from what was supposed to be our start time…where did all the time go? I learned that we would be walking about half a mile. At one point I asked a police officer if there would be anymore mud. He smiled at me and said, “no, and good luck today.” 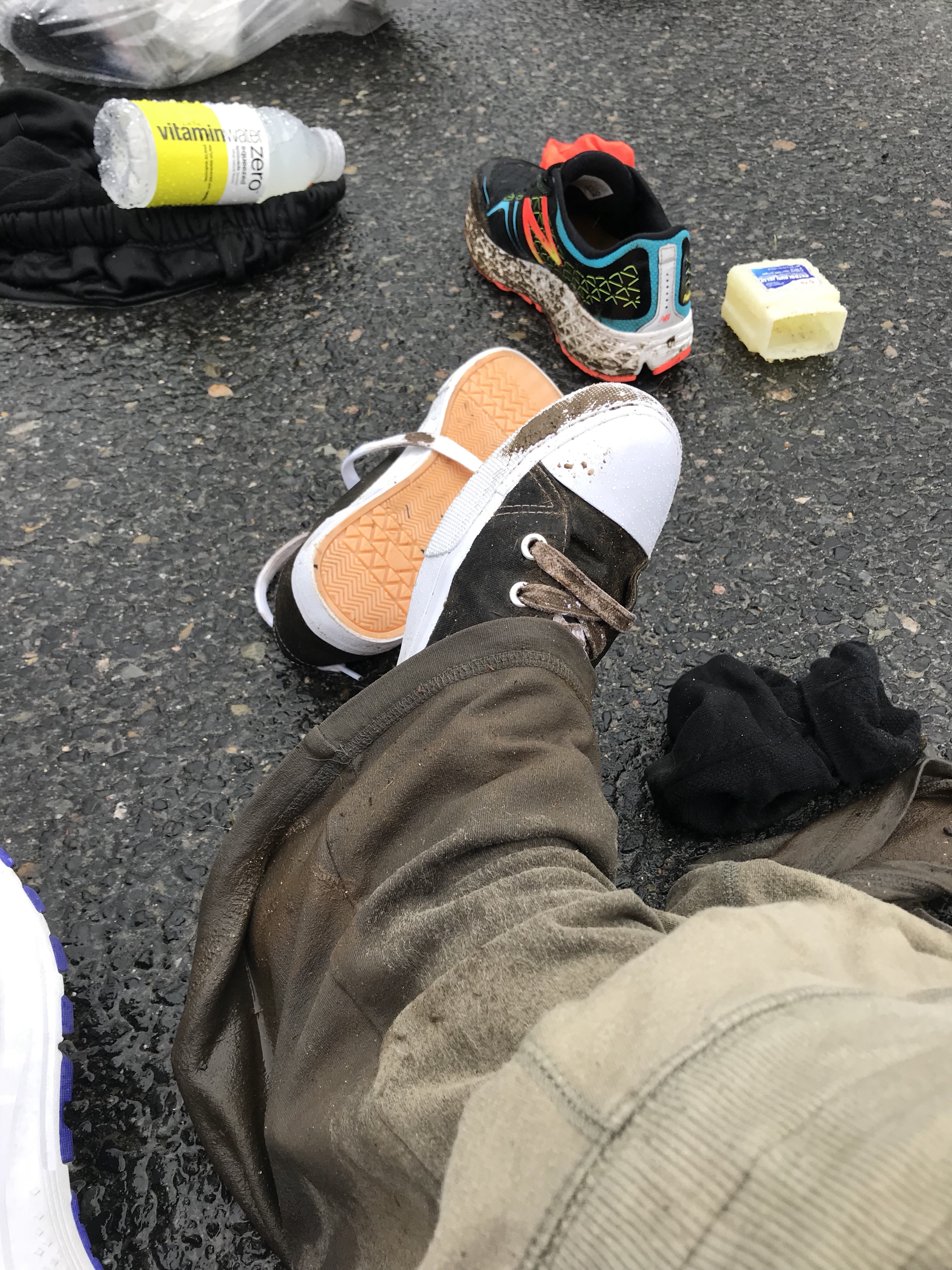 With no more mud on the horizon, I looked for a place to change my shoes. There was a slight sloping paved area, where obviously many runners had already changed their shoes. I sat down. Took off my now muddy sweats and shoes…pulled a hand towel out of my bag and dried my feet. A man sat next to me and commented on how smart it was for me to bring a towel. He then asked if he could use it when I was done. I was happy to share it!
With dry feet and clean shoes I rejoined the line of people heading to the start. There would be no warmup… Just before entering the starting shoot we had to wade through ankle deep running water. So much for my clean dry feet…at least they weren’t muddy. But for the others, they probably benefited from the running water washing the mud off their feet.
I was supposed to be in Corral 1 of Wave 4. What really happened is that they told us to just start running when we get to the line. Organized chaos. I officially started at 11:19am, only 4 minutes behind schedule.
The early miles
I remembered Josh’s advice to start slow, which was easy to do. I was already so cold. My greatest concern was my fingers. They felt like ice. I put hand warmers in my gloves and wrapped my fingers around them. Eventually my fingers warmed up. Unfortunately my butt and thighs were cold and thus already achy.
At 5 miles they were playing Sweet Caroline…I managed a fist pump to go with the words, “so good, so good!” It was miserably cold and wet. I took my gloves off and shoved them in some pockets on my leggings.
At 8 miles I was amazed that I’d only gone 8 miles…I felt like I’d already been out there forever!
At 10 miles they were playing Dirty Water.
At 11 miles I was so thankful for all the people who were out in this rain to cheer us on. 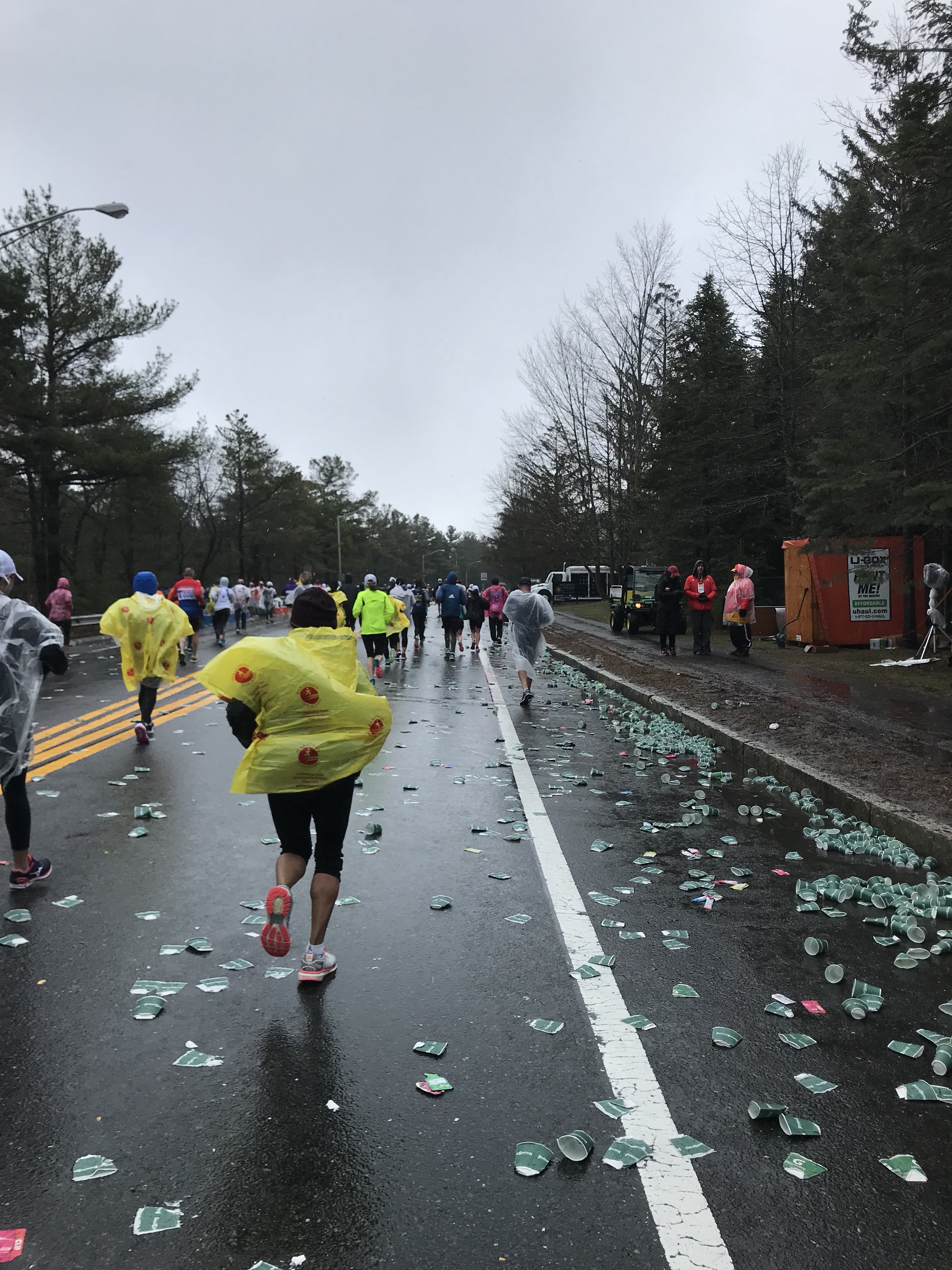 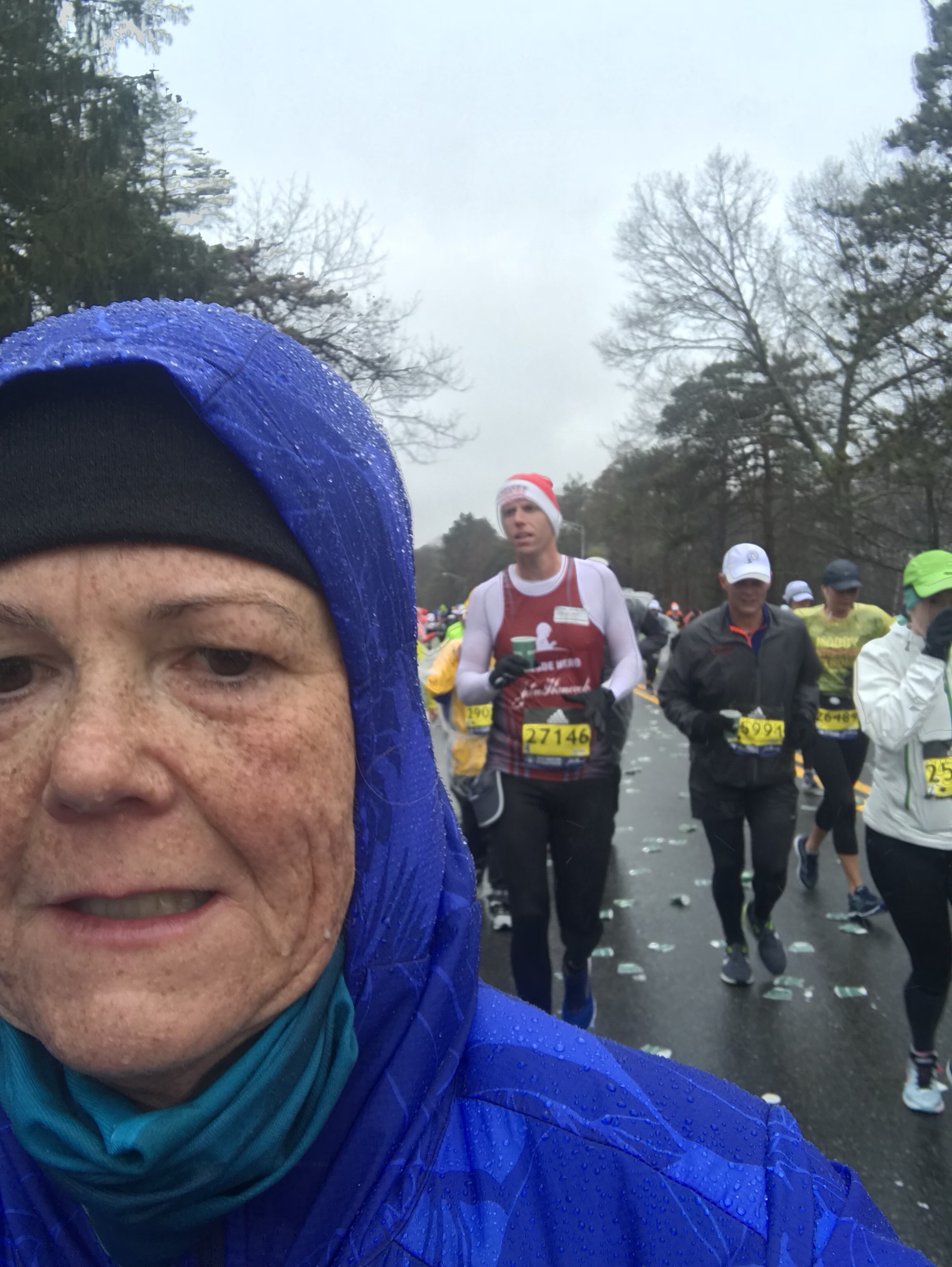 The Middle Miles
At 12 miles I walked through the aid station and decided to pause for a photo, thinking any good time is out the window so I might as well take pictures. But I later talked myself out of that attitude.
At 13 miles I thought, “maybe I should go to the bathroom.” At 14 miles I stopped at some porta-potties. Because of all the rain and mud they were the most disgusting things I’d ever seen. I decided that I didn’t have to go that bad. And thinking of the teasing once from a friend while swimming in the harbor…I thought if I have to pee bad enough I’ll just go in my pants and it will warm me up (love you Mary Jones!). HaHa…I never had to go.
But a volunteer saw me and asked me if I was ok. “Yes” I replied and continued.
At 14 miles the cheering at Wellesley was cool even if there weren’t as many people. Were people stopping to kiss? I don’t know because I had to keep looking forward.
I don’t remember when but I eventually put my gloves back on, learning that wet gloves were way warmer than no gloves. All of me was soaked and cold…except my head. I marveled at how nice and snugly warm my head was. The combo of beany , Buff, and Patagonia jacket was working.
The rest of the jacket was so wet that I contemplated taking it off and giving it to my husband when I saw him. But then I decided that with my head being the only part of me that wasn’t freezing, I shouldn’t mess with things. Plus, the jacket probably providing some protection, just as my wet gloves had been.
At mile 18 I thought that I should tell Josh that I won’t need as much recovery time from this race because I was actually going slower than my normal easy pace. I also remembered my two bouts of Swimming Induced Pulmonary Edema and wondered if I would get it running while so cold. The things that go through my mind!
I remembered my friend Shandra and a cold rainy ultra that she did last year…and that helped me to keep going.
Also by this time it was clear that my watch wasn’t even close to accurate…so I was going even slower than my splits! But I was only focusing on finishing and getting out of the cold.
The Newton Hills (including Heartbreak Hill) didn’t seem that hard…of course I was barely moving anyway. I was only happy to hit Heartbreak Hill because it meant I’d be done soon…an hour? Or more? 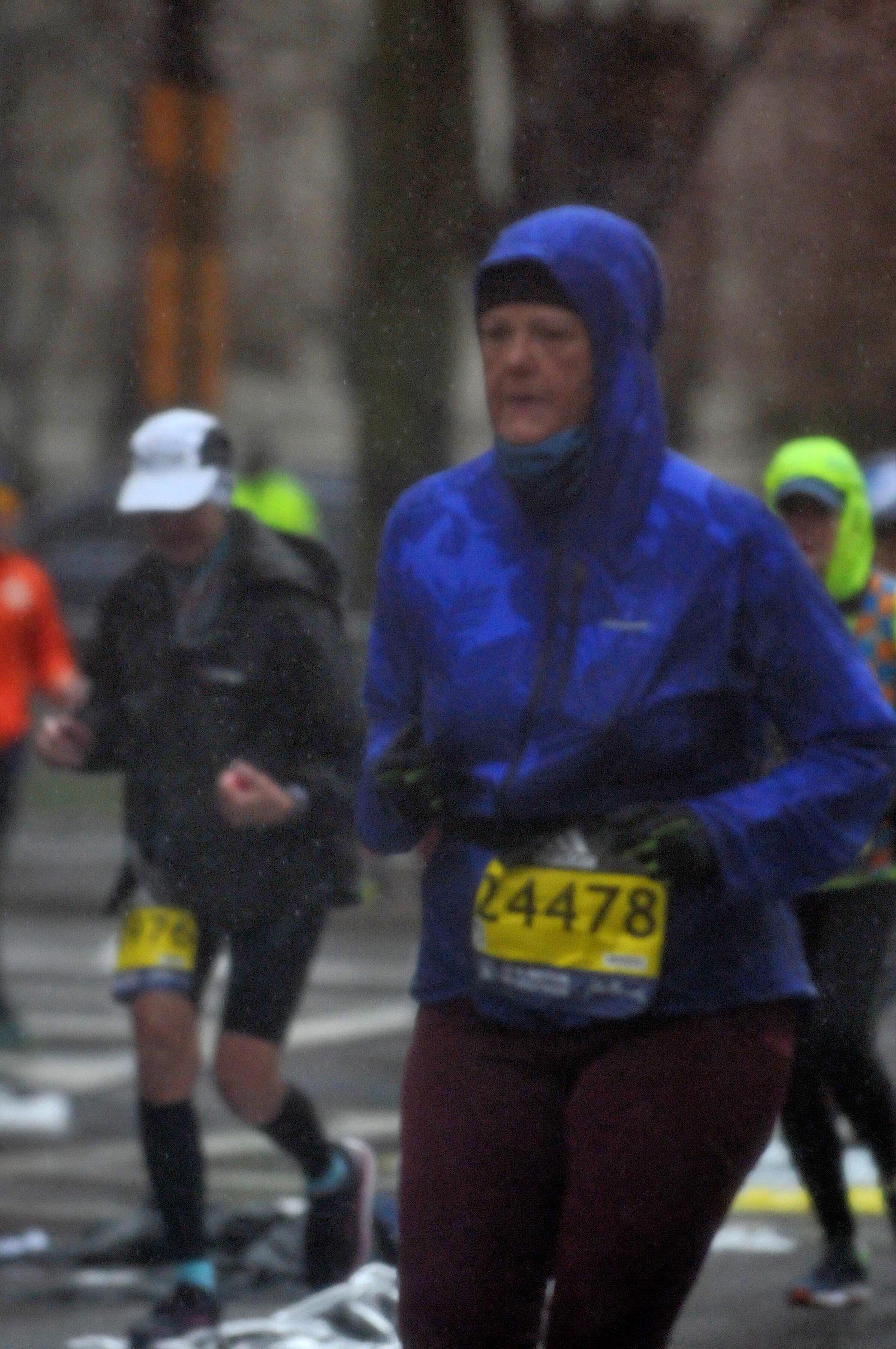 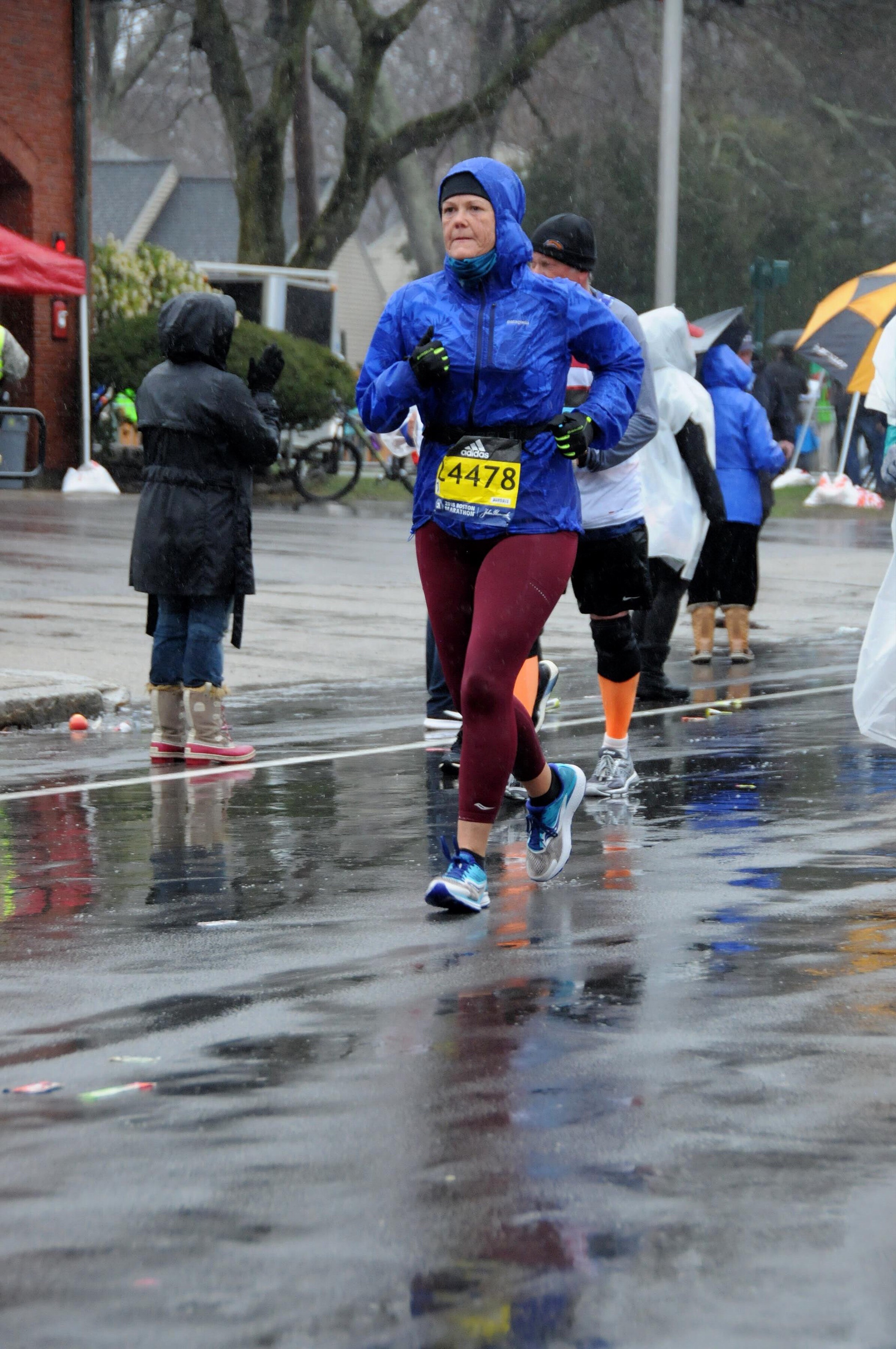 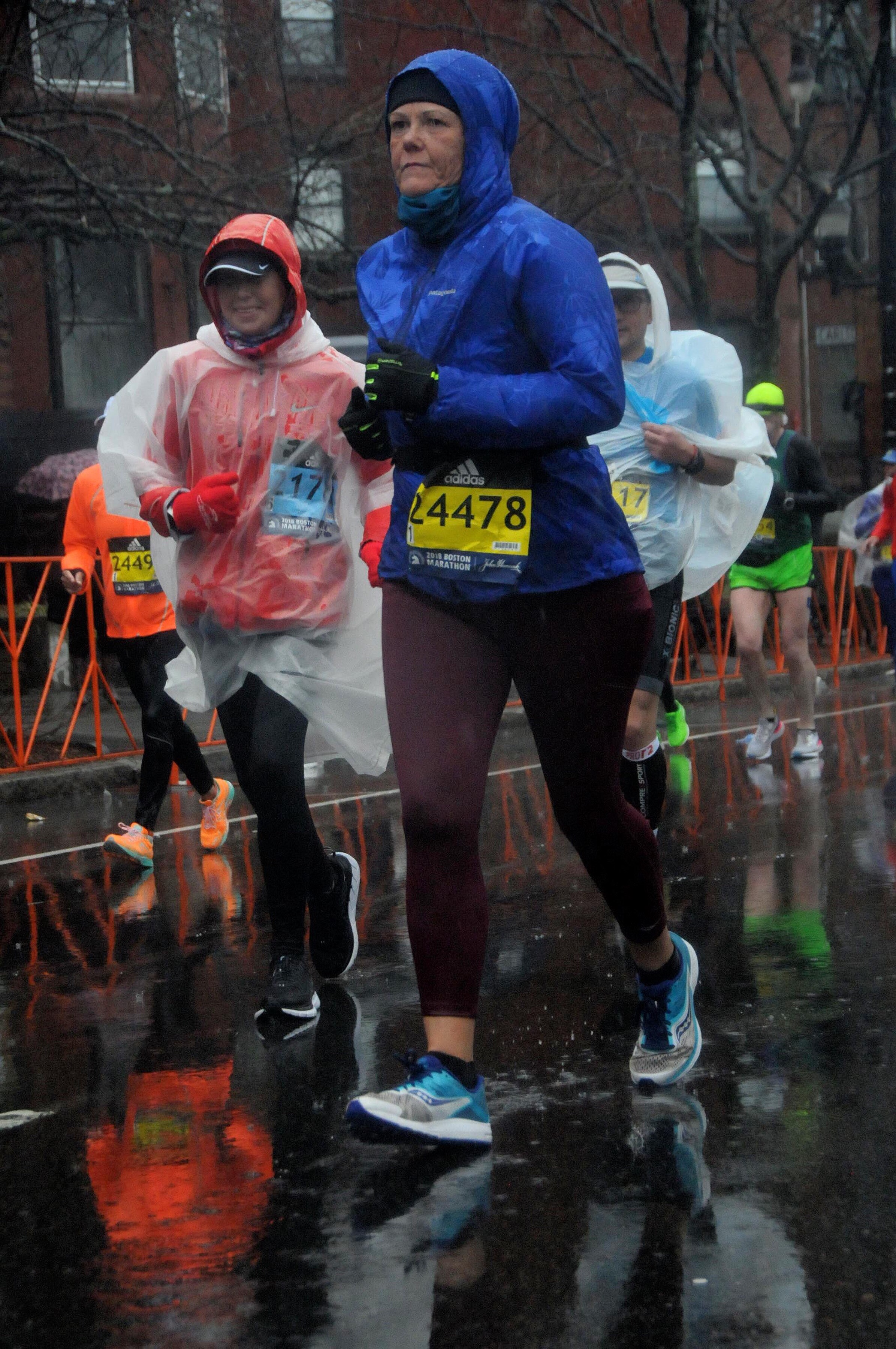 Sometimes the rain would be so hard that if felt as if someone was throwing buckets of water on us. Sometimes a gust of wind would push me back. Sometimes it felt like the rain had turned to ice.
I was incredibly thankful for the volunteers on the course. They were wet and cold too! One man’s hand shook as he handed me Gatorade. Most of them shouted encouragement to us as we passed. The last time I took water it was too cold. This was probably mile 22, so I figured I was ok with hydration.
Every time I felt the wind I reminded myself to stand up straight. Near the Citgo sign at mile 25 I got the combination of rain and water with such force that my mouth filled with water…ok that was my final water stop. 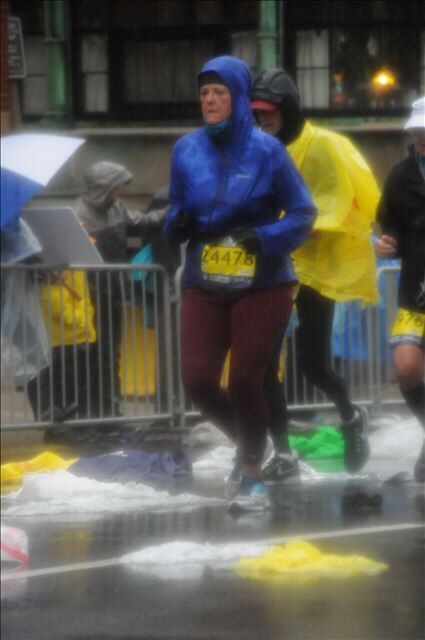 During the last mile I saw so many people that were stopping and stretched. I wanted to tell them to just keep going because they were almost there! Also, the closer we got, the more treacherous the course. People who ran with plastic bags, ponchos, etc were dropping them before turning on to Boylston. The worse was on Hereford. I had to weave my way through the mass of plastic so that I wouldn’t slip or trip. A request for all those faster runners…please drop your stuff to the side next time! 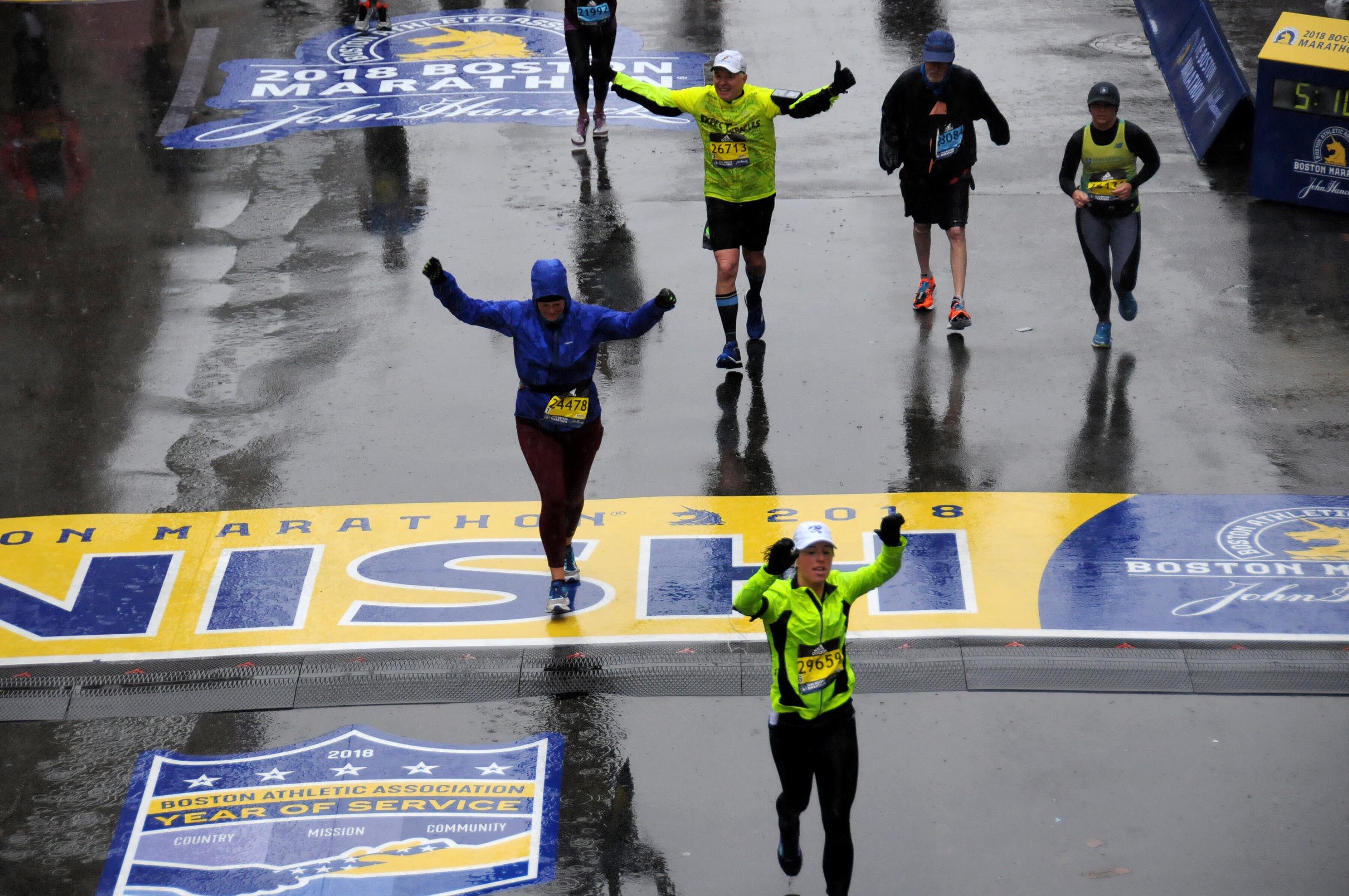 When I got on to Boylston I did my only stride of the day, happily making my way to the finish! My watch thought I’d gone 27.65 miles and I’ve since figured out and fixed the issue (I hope). 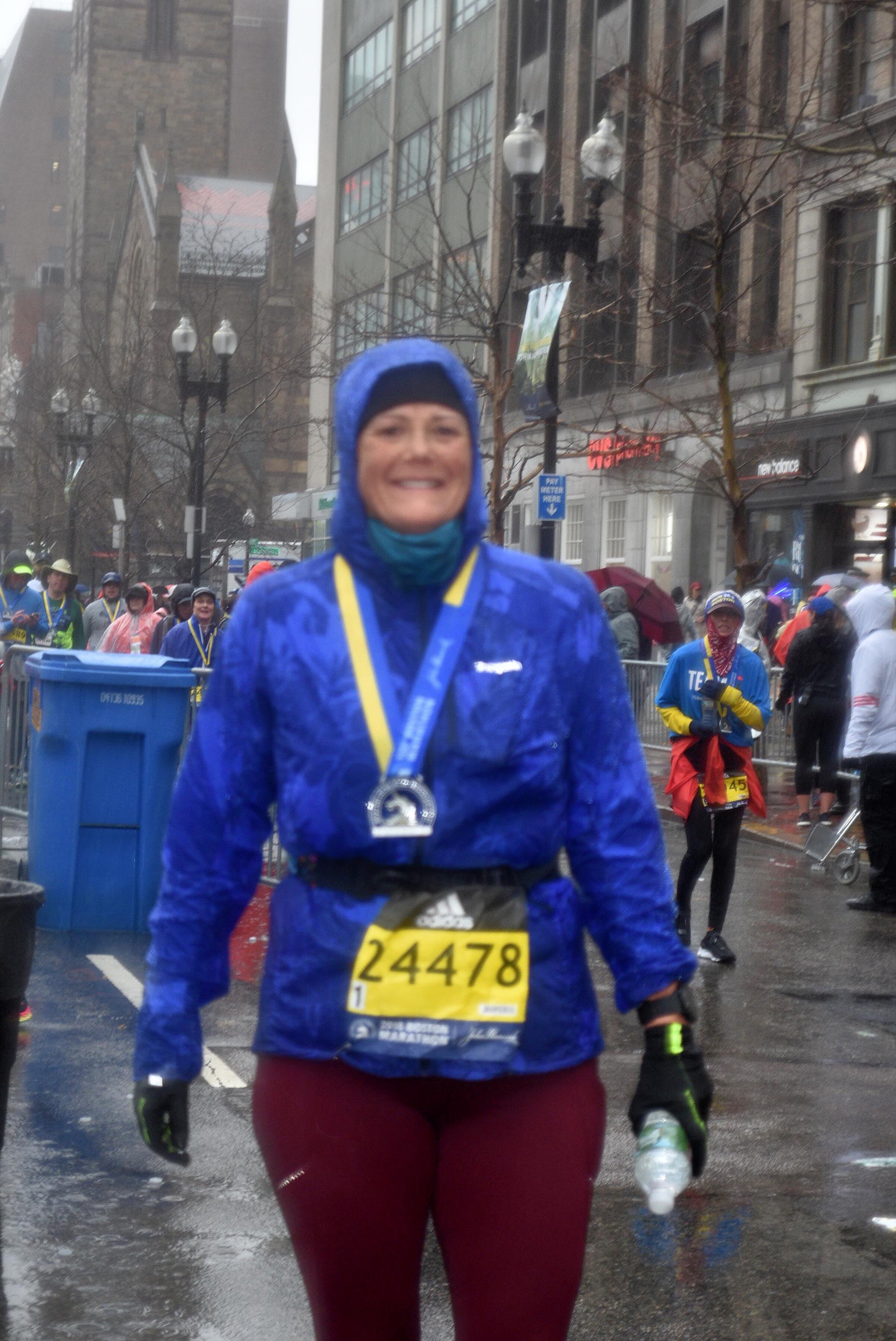 The finish area was very well organized. Water, photo, Cliff protein bar with a pleasant “want me to open that for you?” Then a banana, a bag of other food and a heat blanket.
Somewhere in this finish area I heard Megan yelling from the side. Boy was it nice to see her! She gave me the great news that Desi won. I somehow lost track of her and while I was just standing there a volunteer came to make sure I was ok. Unfortunately Megan was on the opposite side of the street from the family meeting area. Once I got there, nobody from my family was there yet. I momentarily wanted to cry. 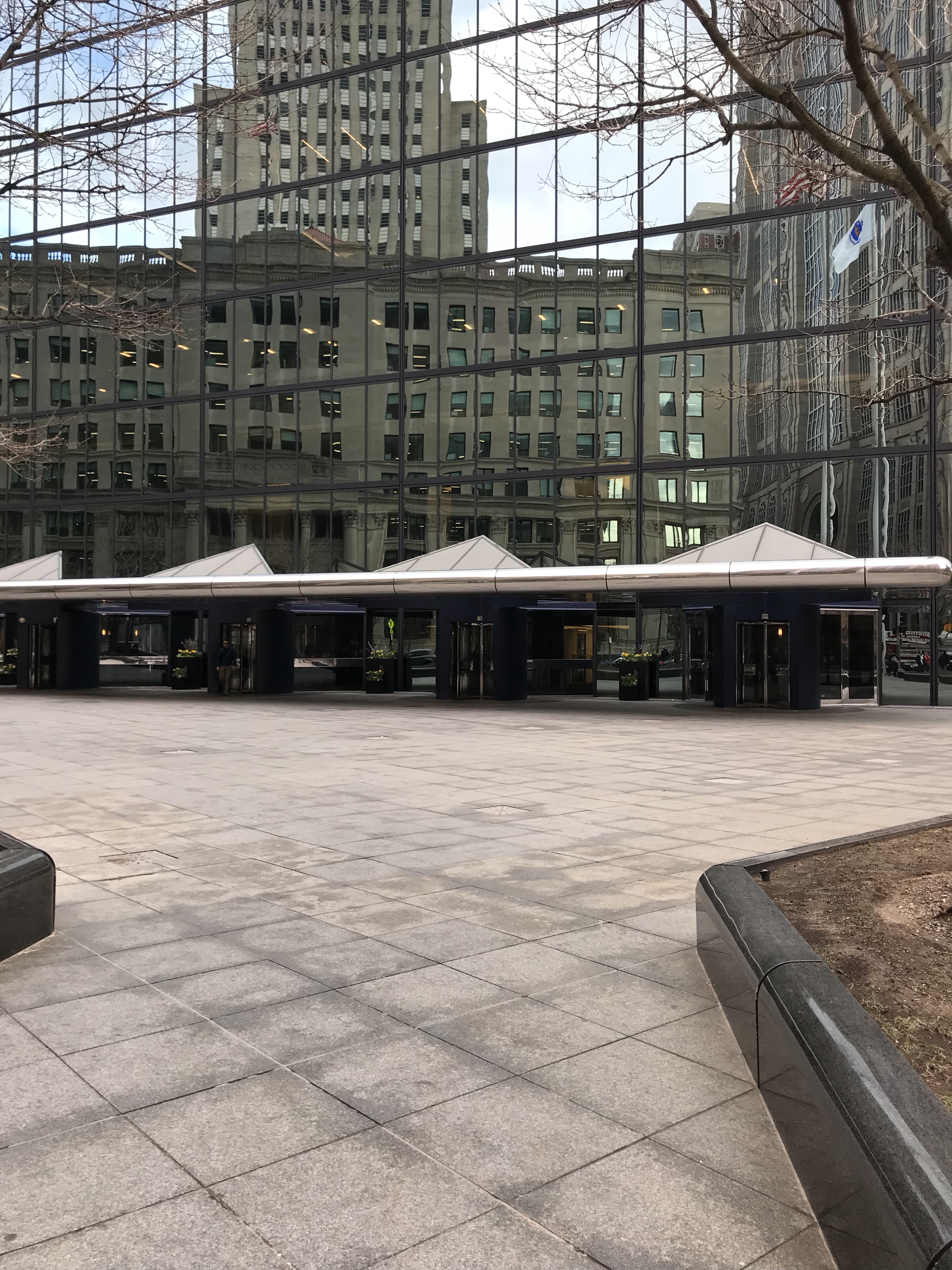 The managers of this building let us have refuge from the rain. Thank you!

I got out my phone to call and tell them I was walking to the hotel, but it started ringing and it was Matt. We figured out that they were close by. Scott then called to confirm my location. I found them and we found refuge from the rain in the lobby of an office building. The managers of that building were wonderful to let us in. A janitor was trying to mop up all the water that all the wet runners and spectators were bringing in. I changed my shirt, wrapped a towel around my waste, put on a dry sweater and a jacket and we headed to the subway.
My first Boston Marathon. I plan to be back in 2020. 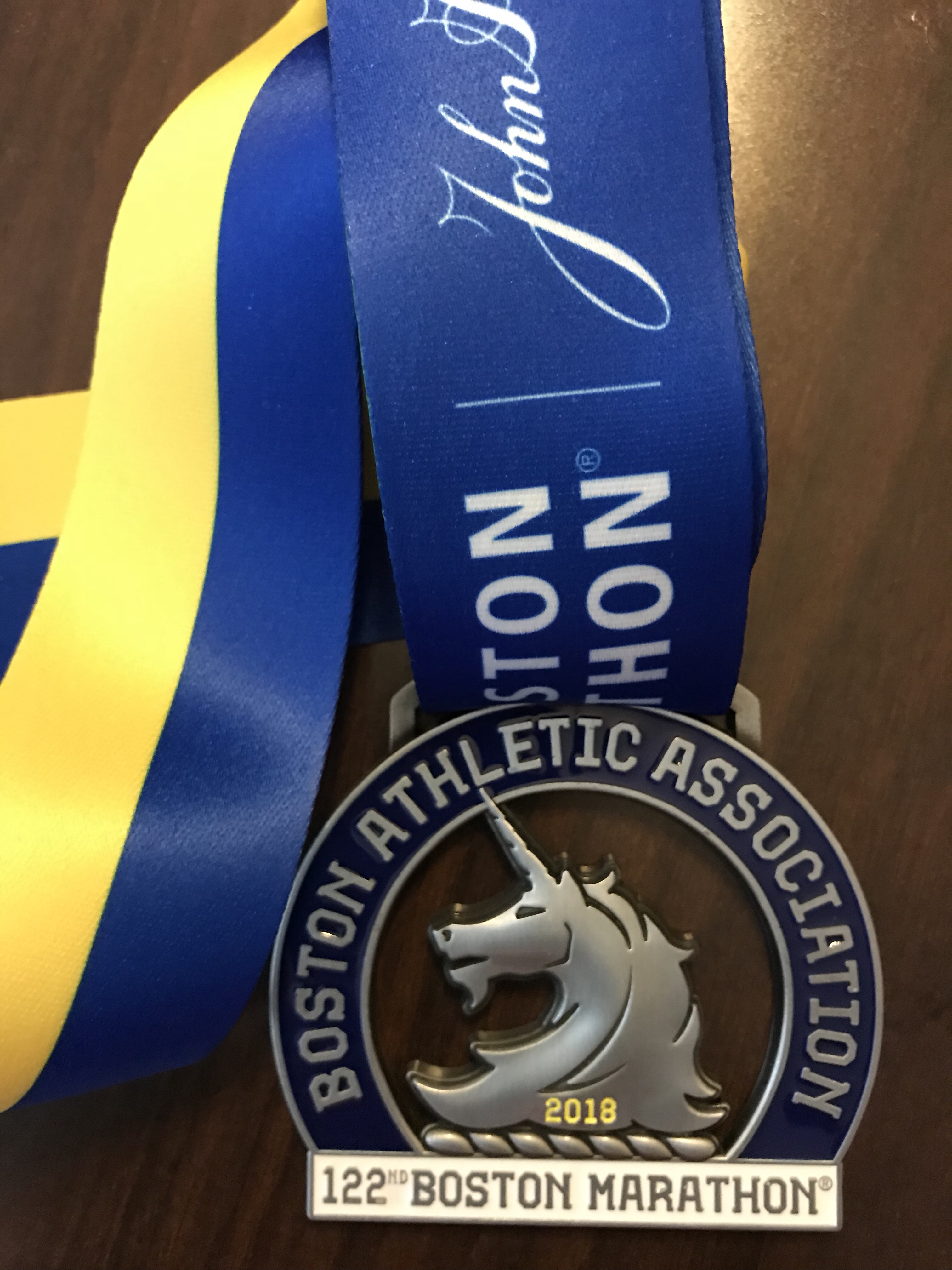