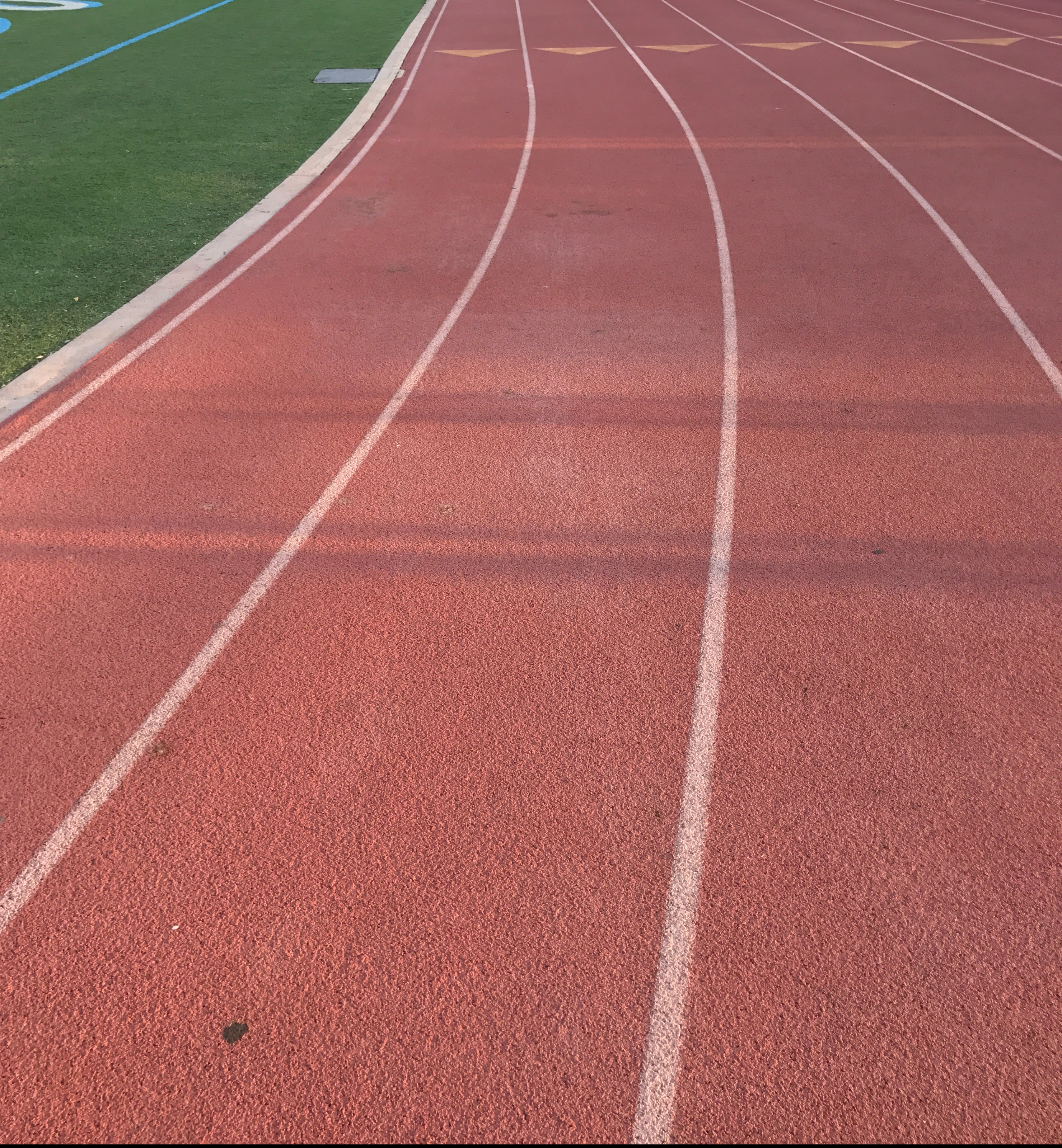 Most Wednesday evenings you’ll find me at one of our local high schools grinding through a track workout with my running club. I’ve been going to these for just over 2 years and I’d have to say these workouts have helped tremendously as part of my overall training routine. I love going to track… even though track is incredibly hard.
Usually our coach posts the workouts before we get there. Yesterday he posted it just a couple hours before. When I saw it, I thought, “this is gonna kill me!”
There are three levels of workout. Most of the past couple years I’ve done level two but for the past few weeks my training schedule has indicate level 3. This usually means a bit longer distance. Here is last night’s workout: 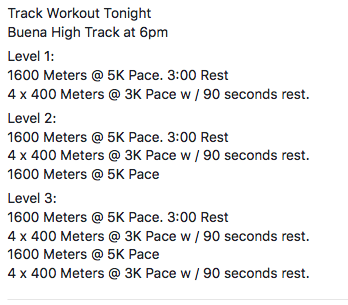 While I love going to track, I’m always nervous when the pace is supposed to be faster than 5k. I’m better at marathons than short fast distances…at least I tell myself this.
So last night, I had to reset my mind. While doing strides as part of the warmup I also did a bit of self talk. It went kind of like this, “I’m gonna die! No I’m not gonna die. Quit saying this! I’m strong and I can do this. I can run hard.” Strides done, I set to it.
We usually go to in pace groups, which we did last night. Mine is the 8:00-9:00 minute mile pace group. There were about 6 of us, but we quickly spread out over the track. I was aiming to run that first 1600 in 8:20, knowing that if I went too fast the latter part of the workout would be a disaster.
So first one down in 8:20 exactly. Not bad!
During the 3 minute rest I walked a bit and then went to get a drink of water and dry off the sweat. I began talking to a new runner who asked me if she’d ever get to be fast. I assured her that she would improve. Started talking about ratio of slow to fast running and looked at my watch and realized that I was out of rest time.
My pace group had already left, so I was on my own. But a group that is faster than me was taking off and I went with them saying, “ha! you’re my new pace group!” I also accidentally hit “stop” on my watch instead of “new lap” so I have no idea how I did on that first 400. I came in about 20 seconds behind the faster group.
When my 90 seconds rest was almost over I told them to go…which became our routine for the rest of the workout. I followed and tried with all my might to keep up and ran the following for the next three 400s: 1:53.8; 1:51.1; 1:51.3.
This was fast for me!
The second 1600 felt easy in comparison to those 400s, at least the first half of it. I caught up with my husband who was running his own 2nd 1600. We ran a lap side-by-side and then I told him to step it up. He’s faster than me so he should be going faster! Usually I start to slow at the later stages of track workouts…just like I do in a 5k race. I’m trying to get better. So I did not want to do this 1600 slower than 8:20. Could I hold on?
I ran hard across the finish line, setting a new lap, and slowed down, huffing and puffing to look at my time. Nice surprise! 8:18 exactly.
Now for the really hard part. Three minutes rest followed by 4 more 400s.
I went out with my new faster than me pace group. Ran hard, crossed the finish while setting a new lap, stopped, looked and was a bit disappointed in myself with a 1:55.6. While this is a good time for me I didn’t want to do my usual and slow down as the workout proceeded. I said, “4 seconds slower.”
90 seconds later, attempt number 2. Run hard! 153.2 Yes!
90 second later, attempt number 3. Can I keep it up? 1:52.7 Yes!
90 seconds later, attempt number 4. I was tired. I tried to keep my eye on the group ahead of me. As my legs felt heavy at the 200 mark, I pushed, thinking of how hard it is to finish a marathon and pushed. I crossed the finish line not sure about my time for this last 400. Nice surprise! 1:53.5
So…instead of this workout killing me. I killed it!
The lesson. When you find yourself daunted by a difficult task, don’t let your self-talk defeat you before you even start. Instead focus on what you can do, as you dig deep for the strength that is within. Then work hard! Don’t give up.
And another lesson. We might think we are running alone…and we often are. But when it comes to track and hard efforts, we do so much better when we help one another. I’m grateful for the encouragement of my faster than me pace group last night. They were always ahead but still pulled me along. And they were always encouraging as I crossed that line.