I Can Run Hills! A Recap of the The San Francisco (First) Half Marathon

I Can Run Hills! A Recap of the The San Francisco (First) Half Marathon

Going in reverse order we ran the 2nd half of this race a year ago. We chose the 2nd half because my son wanted to finish near the baseball stadium…and, being a net downhill it was an easier course. The plan was to run the 1st half this year, and possibly the full marathon in 2018.
I wasn’t sure what to expect as far as time and how I would feel during the race. I didn’t have much training under my belt for this particular race. Most of June was spent recovering from Mountains 2 Beach (Race Recap). My longest run before this race was an easy 12 miles.
I also wondered about the hills. While the first part of the course is flat, we climb a steep hill to the Golden Gate Bridge and the rest of the race is up and down. I’ve often struggled (more than most) in running uphill. Historically, I am usually passed by “everyone” on the uphill and then I regain my standing while flying downhill at a faster pace than those around me. I was nervous about running too hard in the flat areas only to collapse on those hills.
In conversing with my coach, he thought I should aim for a 2:03, recognizing that while I am fit, its a hard course and I haven’t done any specific training for the race. I looked at a pace chart that had paces for this particular course, so I had an idea of what I would need to do each mile (average would be 9:23 per mile). Mile 6 would be the hardest.

Race morning was absolutely beautiful. The sky was clear and the Bay Bridge was stunning in the predawn light. The temperature was in the mid 60s. I felt good in my warm-up. I was ready for a no pressure, enjoy the sights run.
The first third of the race felt like a warmup. My body wanted to pick up the speed, but I was a bit nervous about those hills! Since we were running with those doing the full marathon, this was probably the most crowded race I’ve run to date (27,000 runners among all races). We had one little hill at Fort Mason. I took it easy, yet discovered that I’m no longer the slowest runner up the hill. Not the fastest, for sure, but this was a nice surprise. Yeah strength training and hill work!

Race data from the first third. Average pace of 9:04 wasn’t to bad as I had been hoping to average 9:23.

As we approached the Golden Gate Bridge, the weather was noticeably cooler. It was foggy, and to my surprise it was windy. I chatted with another runner about what a wonderful morning it was! We both agreed the coolness was great but we could do without the wind. 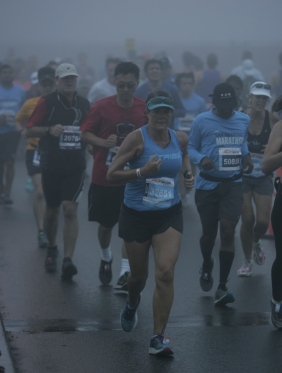 The middle third of the race was the most challenging. This included the climb up to, over the bridge, and back again. It was so foggy that visibility was about 20-30 feet and everything was wet, very wet. There were slippery spots on the bridge and I was very careful so as not to slip and fall. I saw one person go down, but I think the crowd around her just picked her up again. The bridge was the most crowded part of the entire run.
The hardest part of this section was the wind. As we approached the northern side of the bridge, the wind was stronger and stronger…a man in front of me lost his hat in the wind and my husband lost a lens out of his sunglasses. I felt the wind push me from the side. At the turnaround we caught a glimpse of the sun, but then quickly ran back into the fog and wind.

Data from the middle section. I was pleasantly surprised at how well I was doing. I can run hills!

Coming out of the heavy fog…running one a many hills

The final third. After leaving the Golden Gate Bridge we had another nice hill to climb, followed by rolling hills to the end. At some point in this section I realized that if I could hold my pace, I would finish in under 2 hours. That was nice incentive. The only race I’ve so far done in less than 2 hours is a flat, slight sloping downhill race in Oxnard (Santa to the Sea). Last year I did the easier, 2nd half of San Francisco in 2:04:51!

Final section. I had more to give because my average heart rate usually gets into the 160s and I wasn’t there yet.

When I discovered that my Garmin was not going to match the course I didn’t let it phase me, but pushed harder and finished in 1:59:37 (Garmin read 13.26 for distance). This was not an official PR, but in terms of course difficulty, it was the best half marathon I’ve ever run. I even finished 10th in my division (out of 267). I had so much fun I’m going to do the full next year…and get a Club 52.4 Hoodie!

This is the data for the entire race. I’m thankful that I can get this kind of cool analysis from Final Surge. 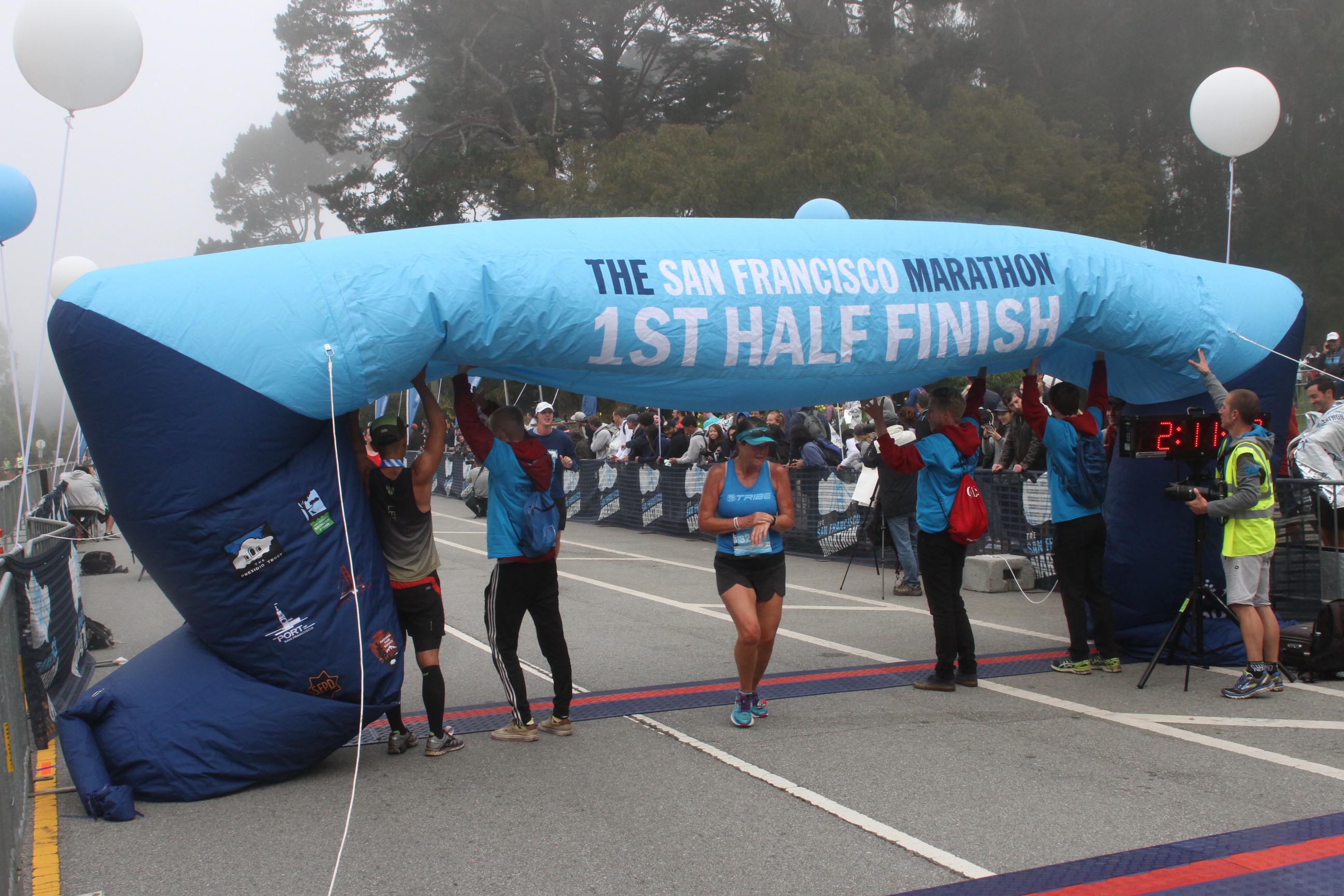 Oops! A bit of technical difficulty for the race organizers. They did a great job…and had coffee with Baileys for us after we finished. 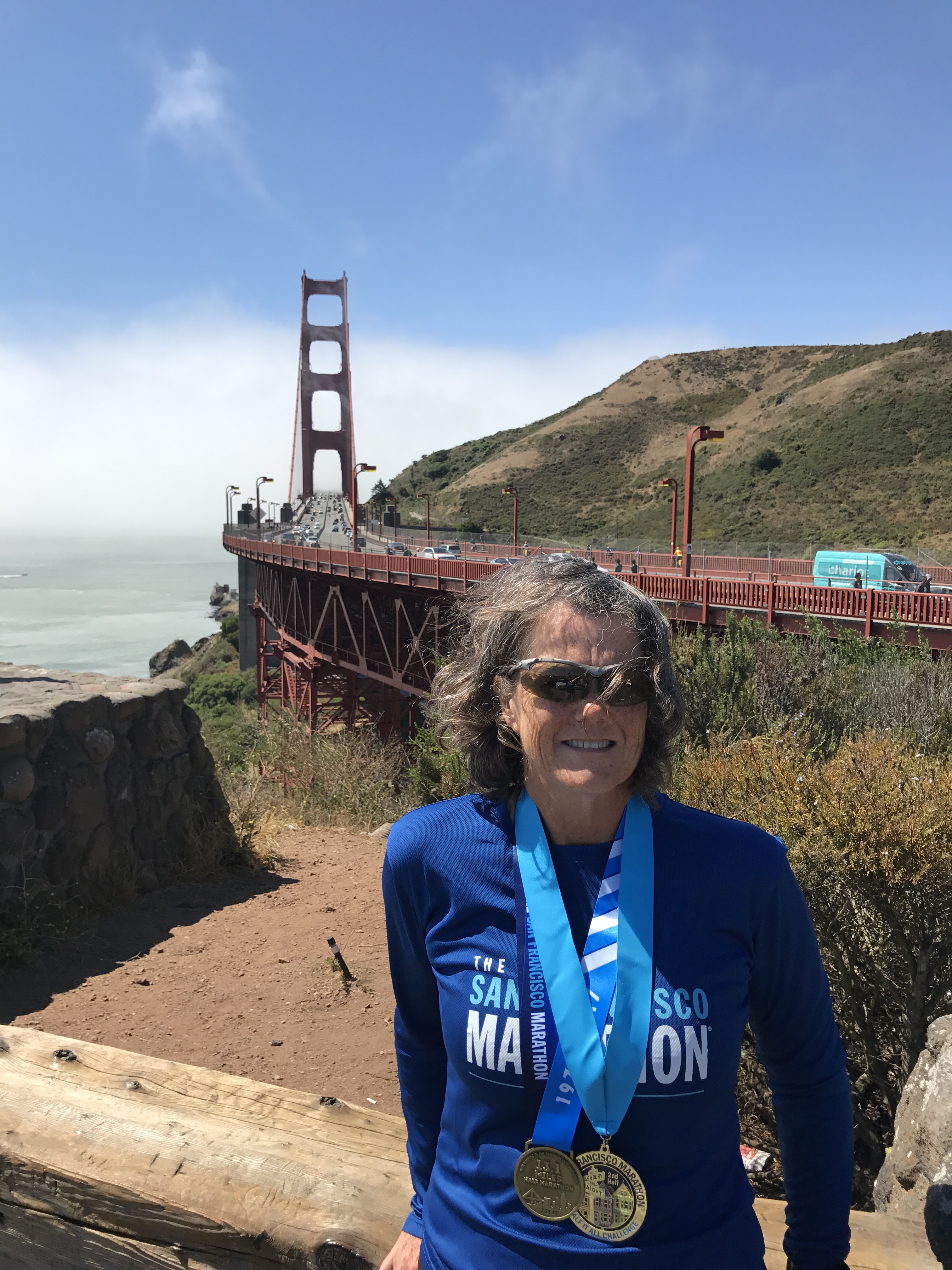 Two medals, for doing both halves in back to back years. We went back to the bridge for a slightly non-foggy photo 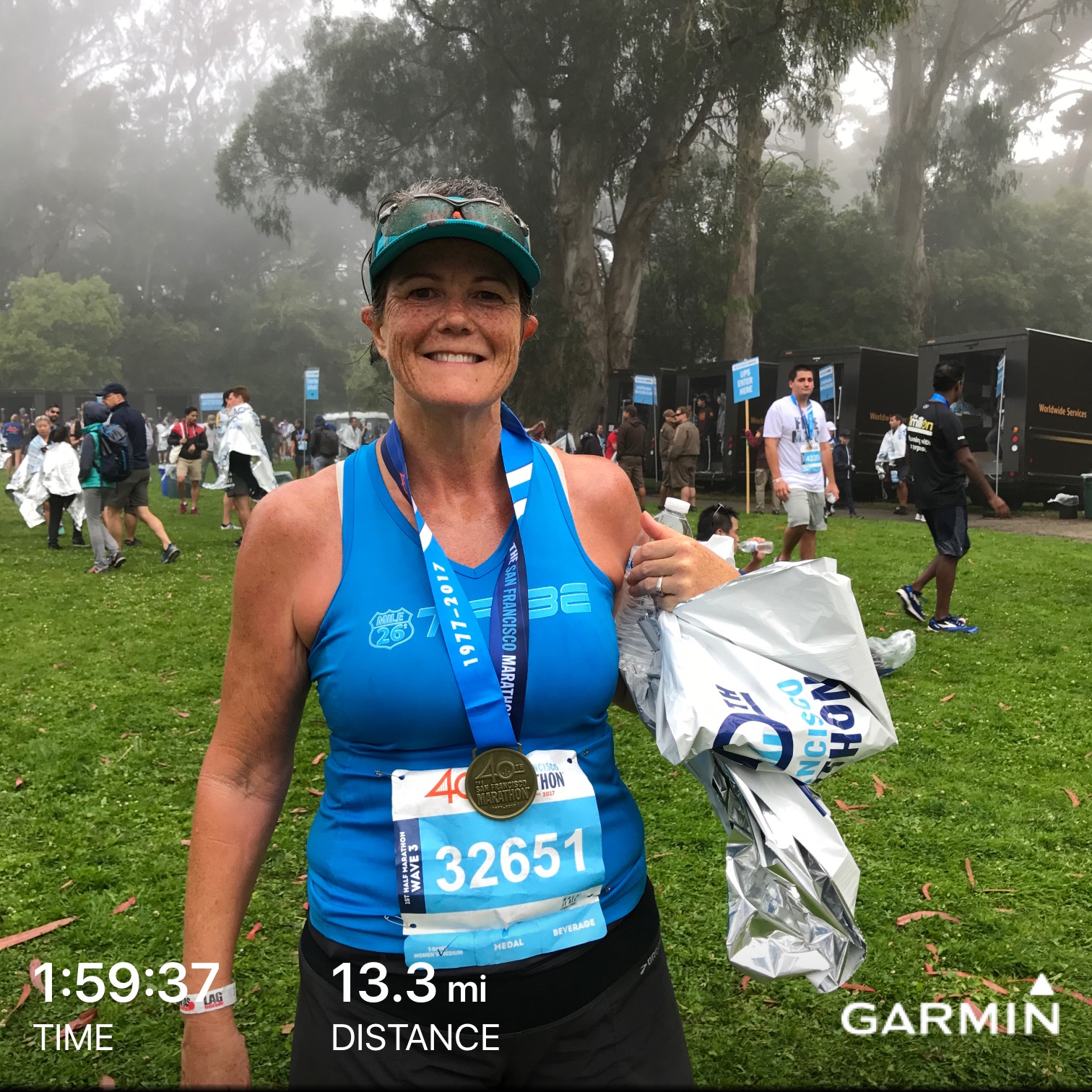 I was all smiles at the end of this race!!!!

Scott and I enjoying a post-race beer. He had a good day too!