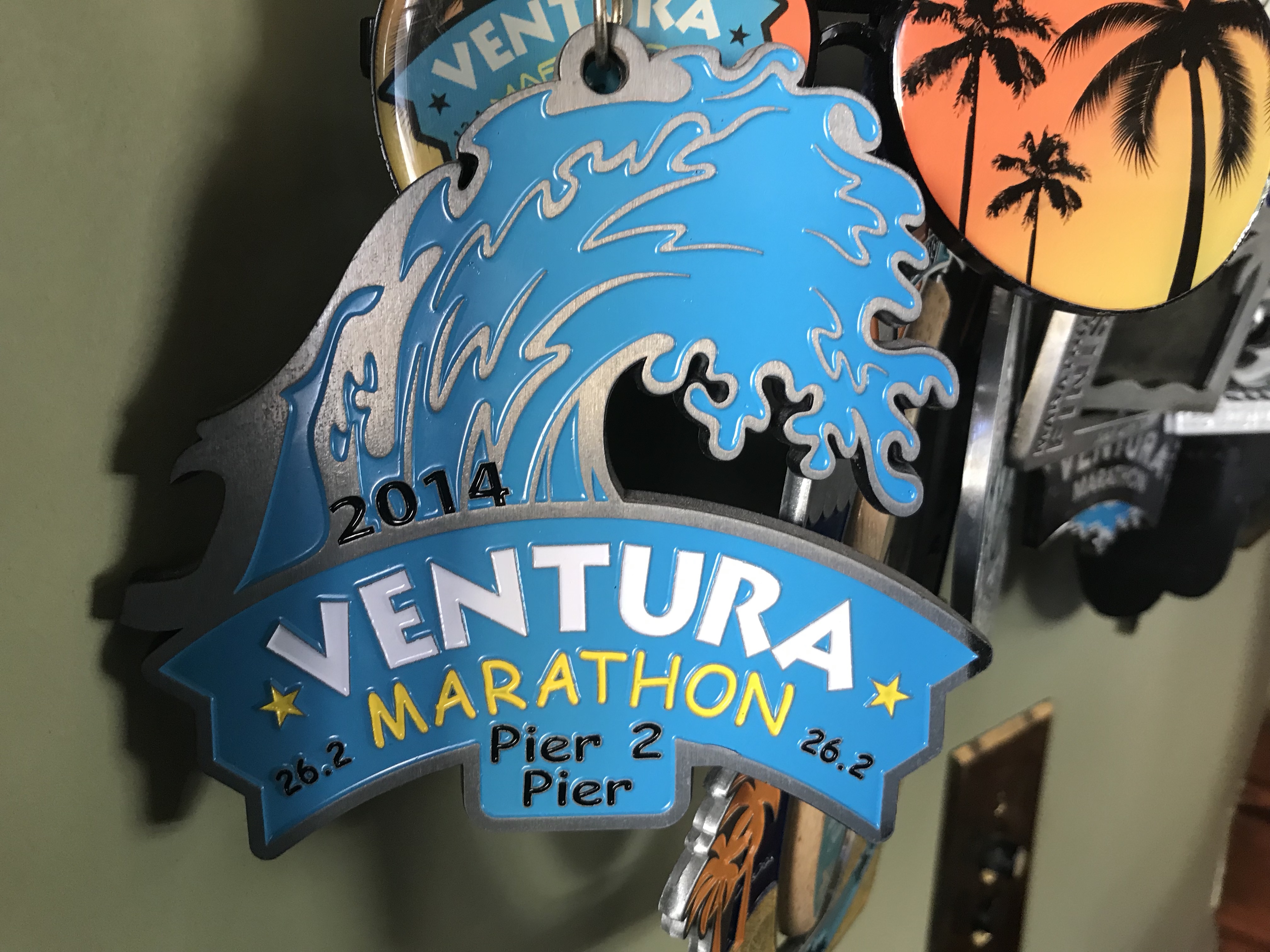 All of my training for this race was done with the help of an online run coaching service. The selling point for this company was a computer based system that would base your training plan on actual fitness. The idea is good, but in retrospect, the plan that I followed was not nearly sufficient for a marathon. I’ve learned that a “real coach”, even if he/she is online is way better. And now I’m a real coach too! Back to my story…

We lined up just before dawn. I was nervous, excited, and ready to go. It was 61° at the start. I turned on my music.

At this time I listened to music while running. I put together a 5 and a half hour playlist in the hope that I would not get through the whole thing. The first two songs were worship songs that were chosen to help me calm my nerves. The next group of songs had a slower beat than most would not choose for a run, but I wanted the music to help me not start too fast.

As we ran, I remember seeing a woman wearing a shirt that stated she’d run 43 marathons previously. Impressive!

I also noticed a firefighter taking off in full gear. While it was still a bit cool, the forecast was not good and I wondered how he’d do. I still wonder how he did!

My church volunteered at an aid station that I hit at about mile 4.5. It was great fun running through the group, smiling, hearing encouragement, and lots of hi-fives.

I was running slow enough that I was only at mile 8 when I saw the lead runner on this out and back course. Seeing all these leaders on their way to the finish was inspiring, and entertaining.

With each step I felt the rising temperatures. It was HOT! By the time I finished it was a scorching 79° which was above normal for this area. (The previous year I volunteered for this race and we were out in the cold and fog, needing sweatshirts.) 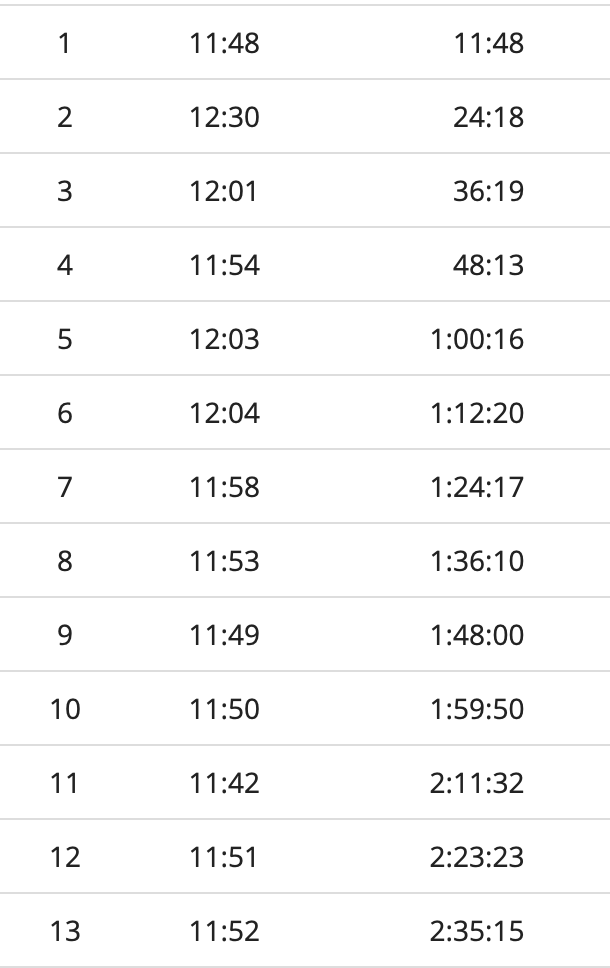 When I hit the halfway point I had, what was for me a good time, it wasn’t too far off my half marathon PR. I was pretty stoked by this but it should have been a warning that I ran that first half too fast. This excitement was short-lived because when I hit the aid station, it was time for some electrolytes and I got the bad news that they’d run out…just water was all there was.

The heat was oppressive. There was no longer anyone to see – as I was so far back that it didn’t take long before I passed all those who were still heading for the turnaround. 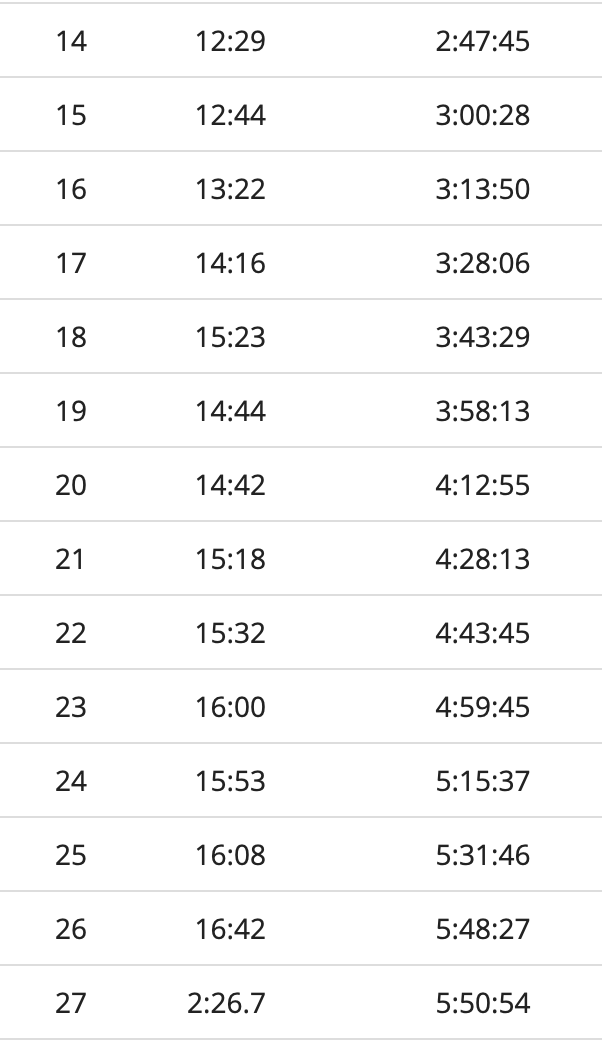 In looking at my splits I started slowing at mile 16. I remember being thankful that my church was at the aid station just before 22 miles. This knowledge helped me to keep going. Community helps!

After passing my church’s aid station, those last 4 miles were awful. I was so hot and tired that I wondered if I could make it! But I wasn’t the only one out there suffering. Community helps!

With a mile and a half to go we passed a sign for the 5k turn around. A man next me said, “I should have signed up for that race!” That chuckle helped me to get to the finish.

I finished this first marathon in 5:50:54. The course limit was 6 hours, so I cut it pretty close! Scott was waiting for me…he’d been worried because it was getting so late. None of the food at the end looked appetizing to me, so we left and got a chocolate shake. Not the best post race choice but not the worst either. When I arrived home I got in the shower, almost fainted, and had to quickly get out and go lay down.

But I did it! I met those two goals. I completed my first marathon and while definitely bringing up the rear, I was not last.

I’d run this same race the next year, but it’d be a completely different experience. Still hot (two years in a row of hot weather). I remember almost crying that morning when there was not a cloud in the sky! But it was so completely different because in April of 2015 I joined the Ventura Running Club and trained with their group training plan. The running club is so important to me know it’s surprising that I only joined it 4 and a half years ago. Community not only helps…it’s a necessity.

Strangely I don’t have any photos of this race.