I have this dream of someday completing an IronMan. For more reasons than the needed endurance, it won’t be easy. I am confident in two of the sports, swimming (not fast but comfortable) and running (not bad for my age). The bike ride will be my challenge. 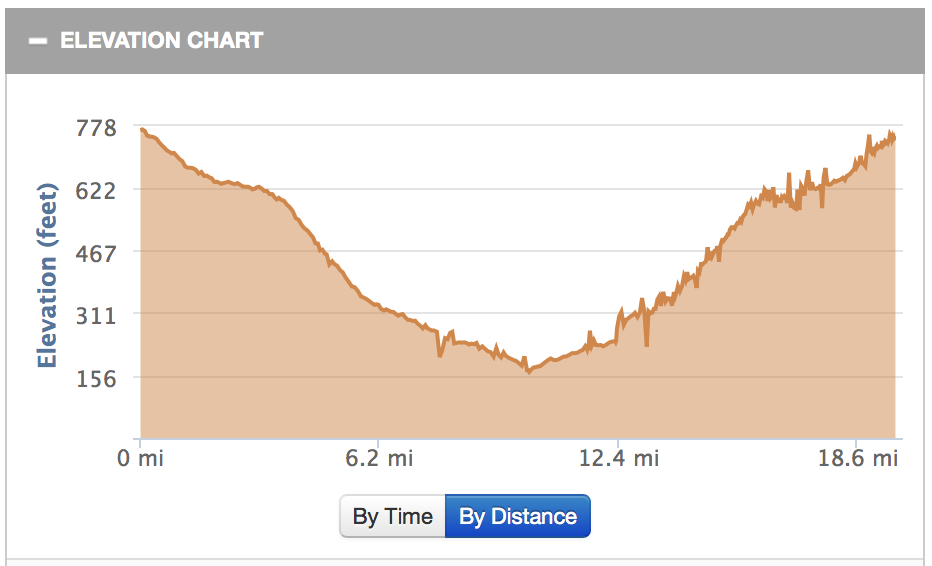 From Ojai, down 10 miles and back up again. The down and up should match…a Garmin issue

Two reasons. First, I have a phobia of riding my bike down hills. Second, I am not very experienced on a road bike and thus not altogether comfortable when I attain any speed. And, although I say I want to ride consistently, I don’t. So that, until Thursday of last week I hadn’t ridden at all in 2018. Like those who find excuses to not exercise, I am good at finding things to do in lieu of getting on the bike.
A couple weeks ago a friend organized a “Wheels and Wine” ride. It started in Ojai (up the hill from where I live) with an out and back…or in this case down and up. I went even though I was nervous. I told one of my friends that I have a phobia of riding down hills, so I was a bit scared.
The hill though is not steep, making it a good place to practice. To face my fear. To get comfortable.

We parked at Topa Mountain Winery, let them know we’d be back for wine after our ride and took off. I told them not to worry if they dropped me, as I would probably be slower. HaHa…most of the group dropped me in the first mile.
Slow and steady I went. Down. Down. Down. Not too fast. With each mile I was a little bit more comfortable. I began to wonder if I should turn around, so as not to be too far behind everyone on the way back up. As I contemplated this, I came upon the group. They had decided that 10 miles down was good and they were waiting for stragglers.
After a drink of water and a Cliff Shot Block, I started back up. I also received a lesson in how to work through the gears while riding up a hill…try to a steady cadence. Ok.
I was immediately behind everyone, with a growing gap…just like coming down. But as I rode I thought, “well, I’m not afraid to ride uphill, so maybe I should try to keep up.” With this thought in mind, I sped up to catch up. Here’s what happened.

I caught up so well that I closed the gap faster than anticipated.
I tried to slow down, but….
Suddenly the back tire of my friend Michelle’s bike was right in front of me.
I swerved left to avoid her…
But swerved too hard…
Into the gravel that is alongside the paved path.
As the bike went out of control…
I yelled “Shit!”
And crashed into the split rail fence that aligns the trail. 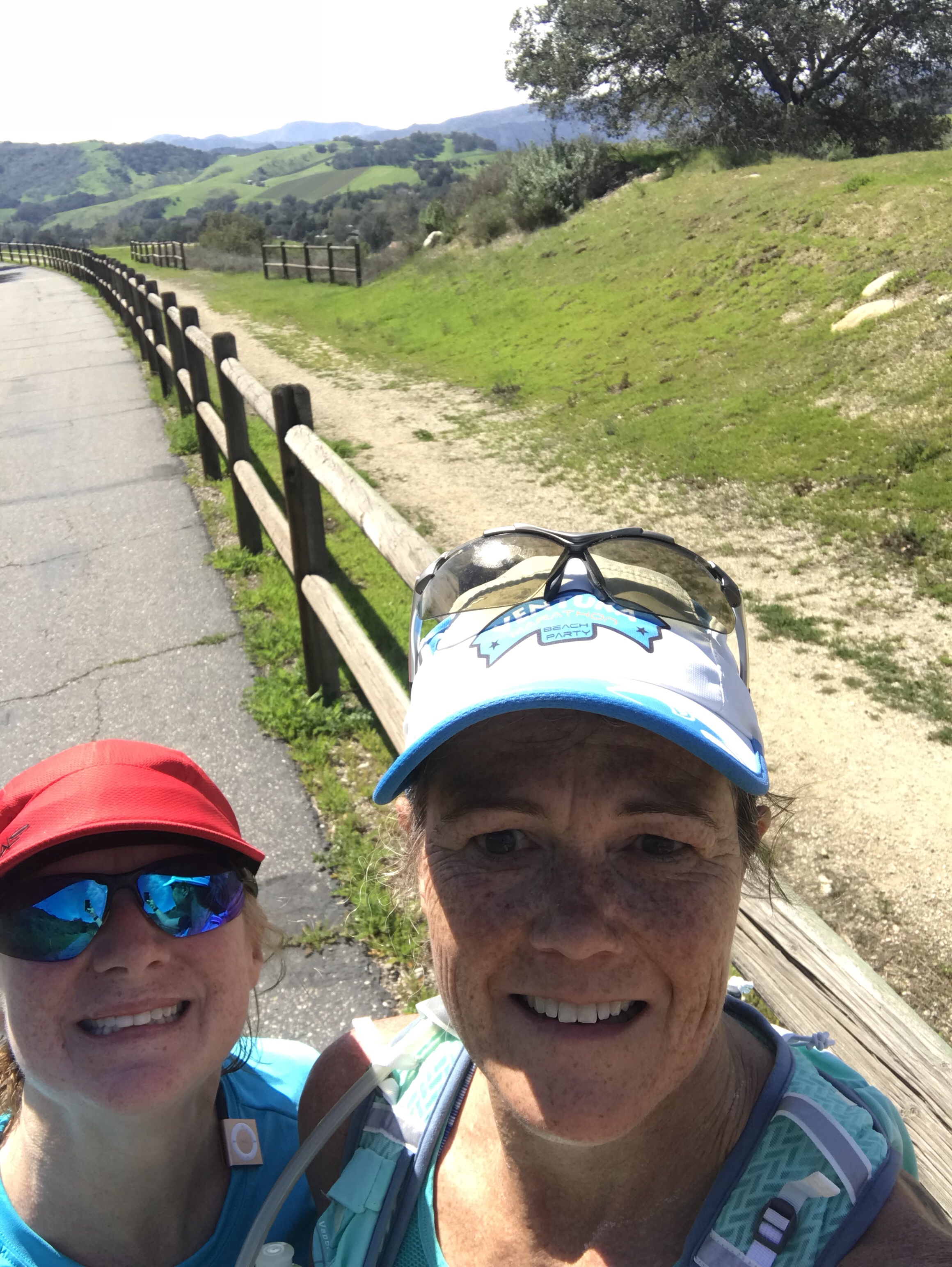 I run this trail and this shot is my favorite part. It is not where I crashed – no gravel – but the same fence that I hit.

See? This is why I don’t ride fast bikes! I find it quite ironic that I crashed while going up.
Jen and Michelle stopped. Helped me up. Straightened my handle bars and suggested we stop at a restroom up ahead to wash the dirt and blood off my arm. It hurt, so I wasn’t too keen on hitting it with water!
We started moving and that was when I noticed my knee. It hurt. But not so badly that I couldn’t pedal. At the park restroom I went and washed my arm. Thankfully I could walk just fine. But my arm… OUCH! While waiting for me, Jen and Michelle straightened my handlebars a bit more.
Then we were off for the nine+ mile climb back up the hill. Slow and steady I went. I almost kept a steady cadence even, albeit a very slow one! My knee hurt more and more with each mile. I worried about the possibility of a run interrupting injury. I was going to be so-so-so upset if I’d derailed my running.
I eventually made it to the winery. Someone gave me a cleansing wipe to clean my arm some more. Nothing else was coming off. I commented on this and a friend said something like, “That’s not coming off! That’s your injury!”
I went into the winery to buy a glass of wine. They very kindly gave me two bags of ice…one for my shoulder and one for my knee. 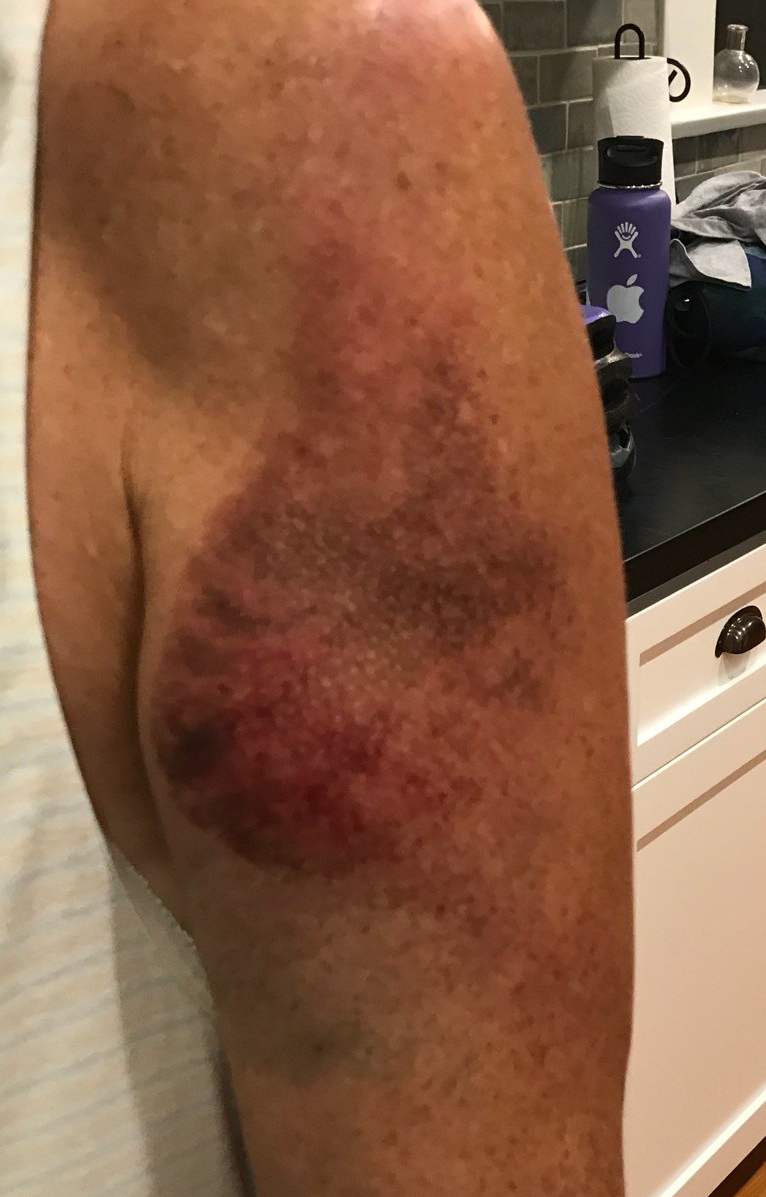 Thursday night was painful. My whole body hurt. I had to cancel a trail run for the next morning. This was a major bummer. 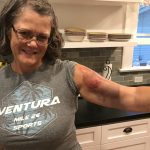 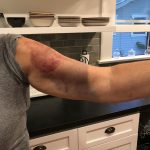 The big bruise showed up on Friday.
By Monday I was ready to try an easy 3-5 mile run. Within a half mile, I felt my left knee, my left shoulder, and my right hamstring. None of them hurt enough to alter my stride. I made it 4 miles. Tuesday, a normal run day, became a rest day.
Wednesday is track day. I went with the plan to warm up and if it hurt to not do the workout. It didn’t hurt! Well, not right away. The workout was hard because my hamstrings were tight and my body was tired.My knee began to hurt when I did my cool down mile. Total mileage for the night was just under 5 miles. 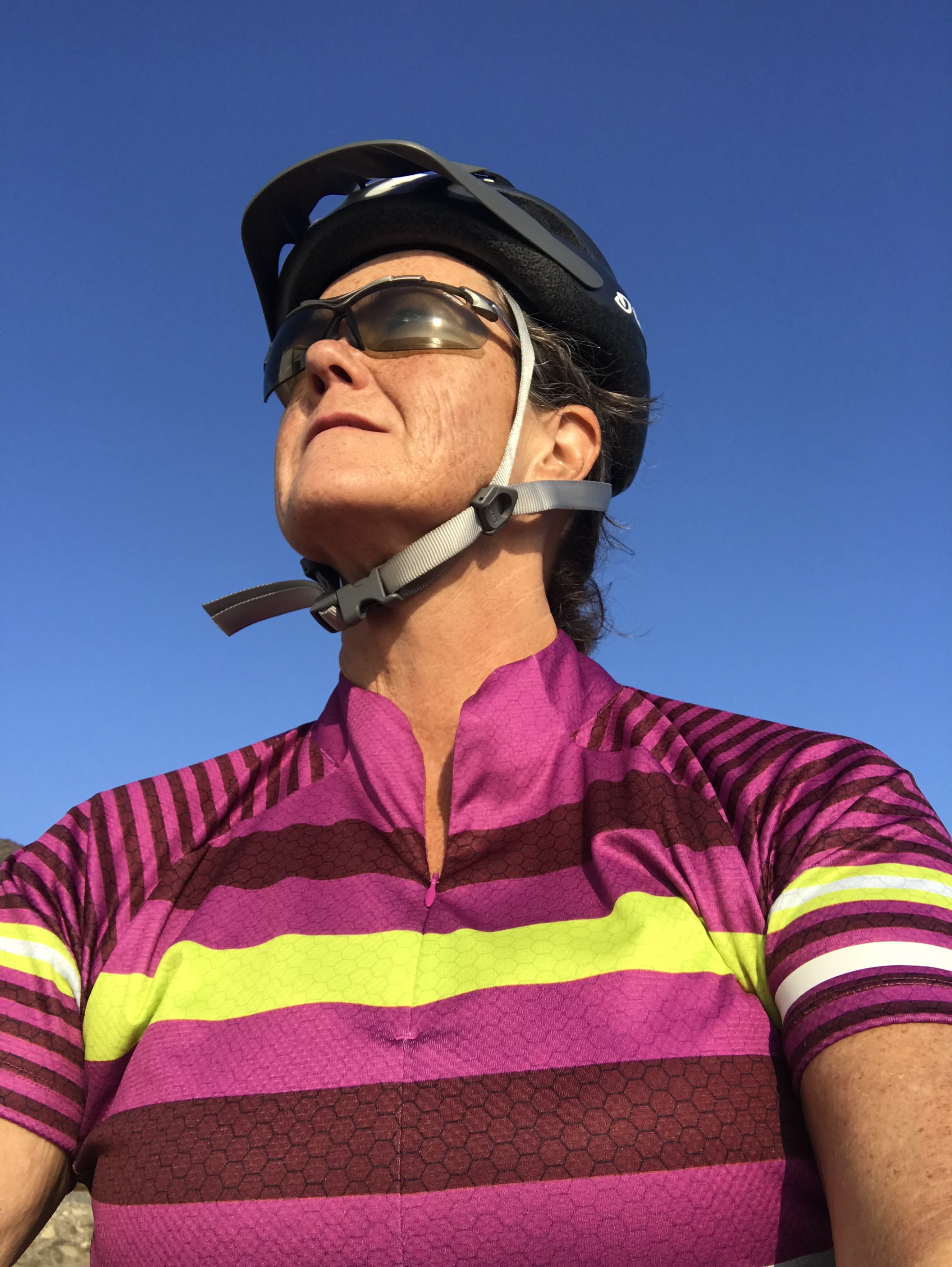 Halfway point of Thursday’s “Get Back On” ride. If you look close enough you’ll see that I didn’t have my helmet latched correctly 😬

Thursday. One week from my crash. I decided that I should get back on the bike. With a bit of nervousness I drove to Ventura, got on my bike, and started riding. I immediately thought the the wind sure felt nice in my hair…WHAT? Wind in my hair? Dang! I forgot to put on my helmet. Thankfully I was only a block from my car. I rode almost 16 miles…with no crashes. A good day.

The best part about Thursday’s ride was in getting back on the bike. It would have been very easy to put it off. I don’t ride too often anyway. But facing that post crash anxiety and riding anyway and not crashing again helped me to remember that it’s important to, “Get Back On” and to face those fears that can hold us back.
I have a goal to become comfortable on the bike. To ride well. To ride without fear. I’ll keep trying because I really do want to do an IronMan someday. 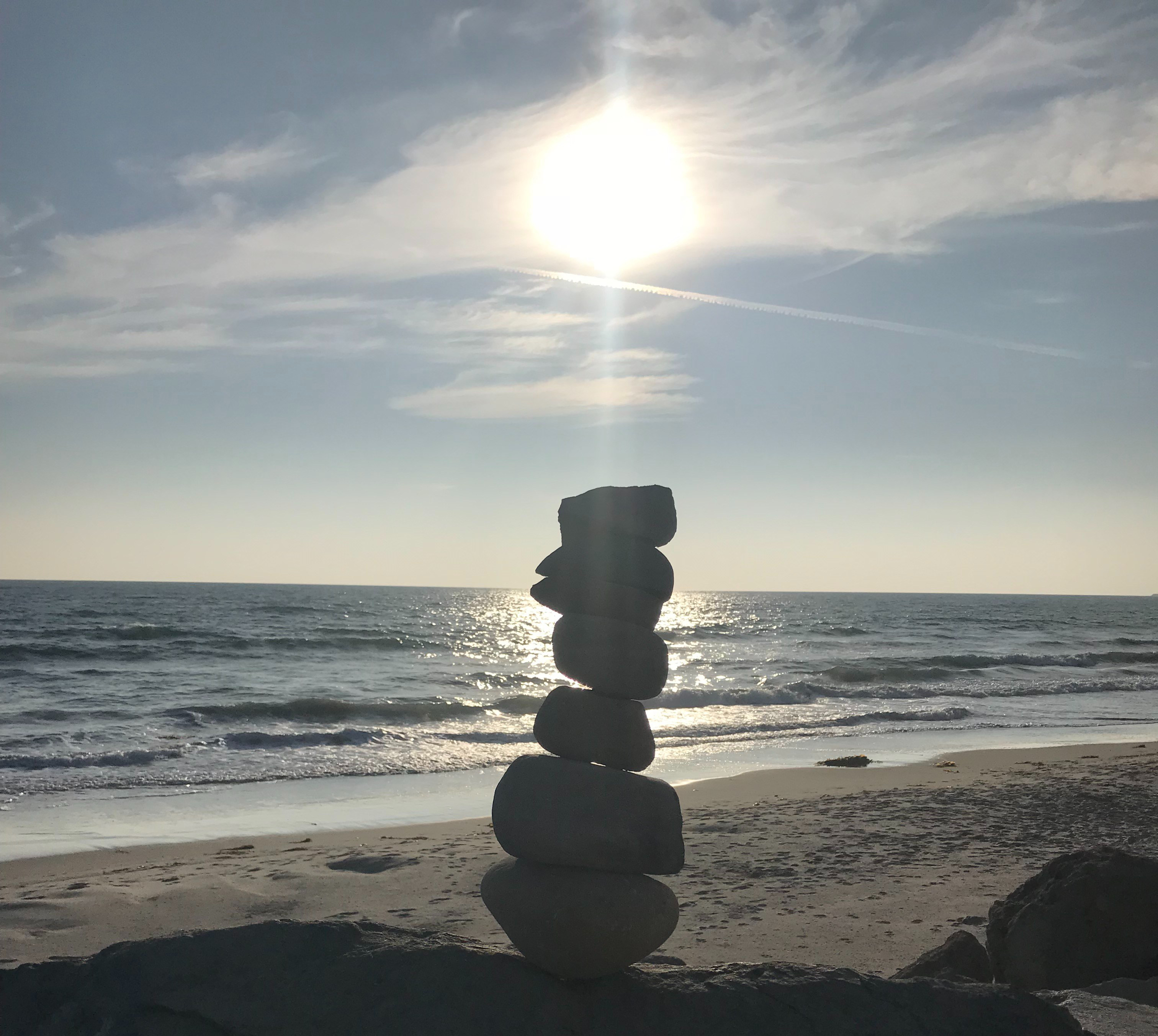 At the halfway point of Thursday’s “Get Back On” ride. A nice reward view for getting out there.