Last week I bought a new pair of running shoes, Brooks Launch. I may wear these in the Boston Marathon. I may wear my Saucony Ride. I have about 5 weeks to decide which pair. Five weeks of alternating between these two pairs of shoes. Five weeks until Boston!
After I brought my new shoes home last week I looked at the wear patterns on my last two pairs of shoes and was pleasantly surprise. Why? Here’s the back story.
I wouldn’t call myself an injury prone runner. But I did deal with a pulled hamstring a couple years ago and through this I discovered that my right side is far weaker than my left. I’ve also had a nerve issue with my right foot that pre-dates my running. I remember going to the doctor for shooting pain and he just blew off my concerns and told me to put a metatarsal pad in my shoe.
I did for awhile, but the pain eventually went away. Then, when I started running some serious mileage the shooting pain returned…but only when I was breaking in new shoes. Once they had a few runs in them the pain went away. 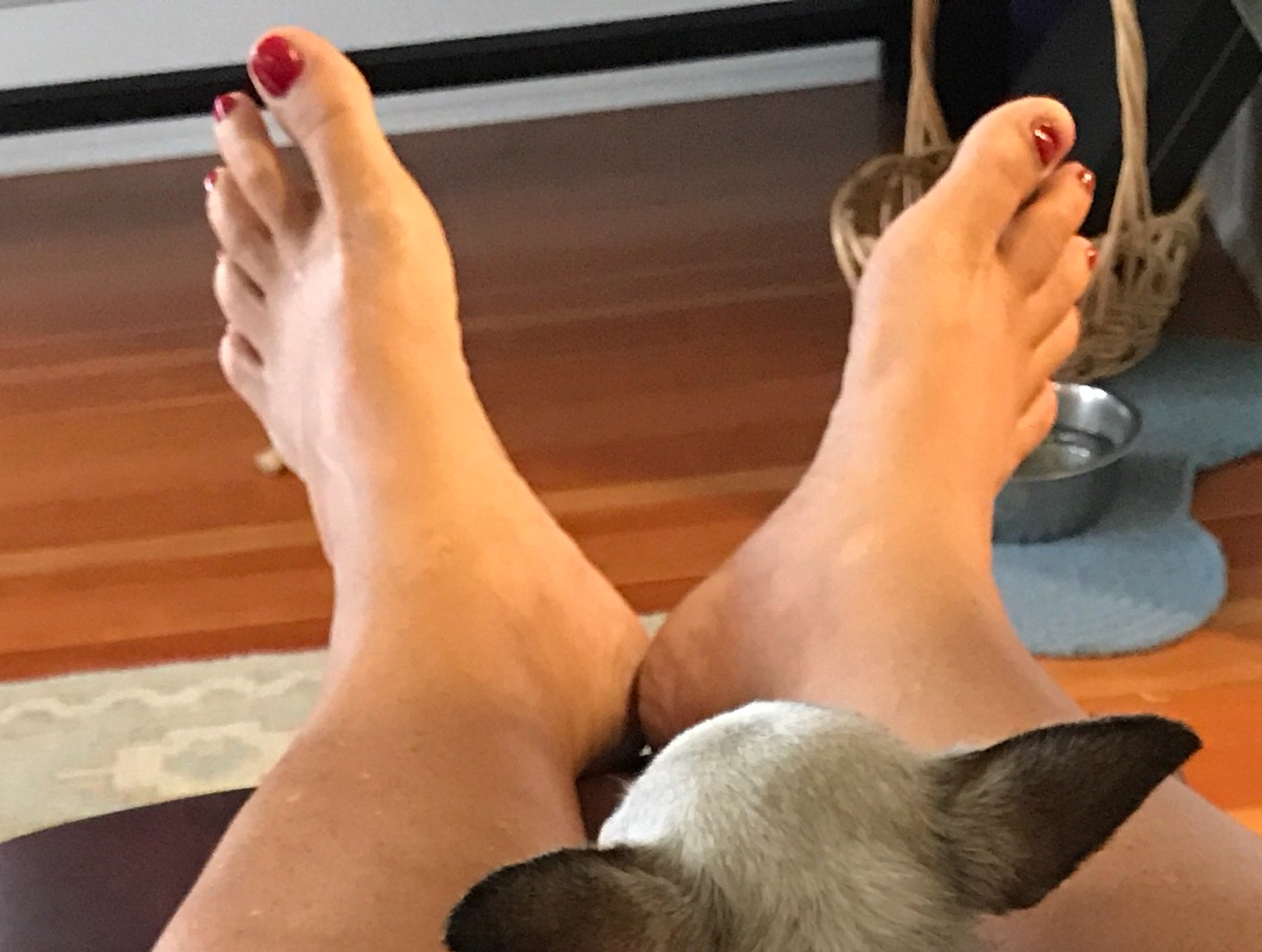 This photo was taken last summer…just me with the dogs on my lap. But it also shoes how swollen my right foots was – around the second and third toes.

Eventually though my right foot began to get sore even after the shoes were broken in. I started putting metatarsal pads in my shoes (since that was what the doctor said so many years ago). This worked for awhile. But then my right foot started to look a bit deformed…and it was starting to hurt. Of course this was the foot that would accidentally step on a rock while on a run, sending shooting pain. Or did I just not notice stepping on rocks with my other foot? Who knows.
Then, two things happened last summer.
First: I listen to the Final Surge podcast and they said they were gaining to be interviewing a podiatrist. Did anyone have any questions? I sent them as brief a backstory as I could along with the question of “what’s could the problem be?” They actually used my question, but because I’d written it so poorly, I didn’t actually get a clear answer. But I did get some helpful information. I even began listening to the podiatrist’s podcast as well, “Doc On the Run” by Dr. Christopher Segler. I’ve learned a lot about injuries and recovery.
Second: one of my co-workers told me that the chiropractor I referred her to was helping her with her plantar fasciitis. This chiropractor, Dr. Romeo Dimaano of Active Spine and Sports Care, successfully treated me for my previously pulled hamstring. I return to him occasionally for adjustments, but it had never occurred to me that he could help me with my foot.
So, off I went to see Dr. Romeo. I think he was a bit amazed at how stiff my foot was. I think I had so much accumulated inflammation that it was just one hard, painful, deformed, and ugly foot. He worked on it. Ouch! And worked on it. Ouch! And worked on it. After every treatment. “Does it feel better?” “Maybe a little was my reply.” I was also thinking that this injury was years in the making so it wasn’t going to go away overnight.
But just to be safe, he wanted me to see a podiatrist and also get an X-ray. I did and the podiatrist said that while my foot did not have any broken bones, it’s possible that I had a stress fracture that is now healed. He didn’t have much else to say, because by the time of my appointment, Dr. Romeo’s manipulations had started working. The swelling was down and there was little pain. The podiatrist suggested I put orthotics in my running shoes. I did, but I don’t want to keep using them.
So, I’ve continued to massage and exercise my feet. Since it’s probably no coincidence that the problem foot is on my right side and my weak leg is my right leg, I’ve embarked on (more) serious strength training. I’ve done lots of one legged work: squats, lunges (back leg elevated), bridges, jump rope, etc. 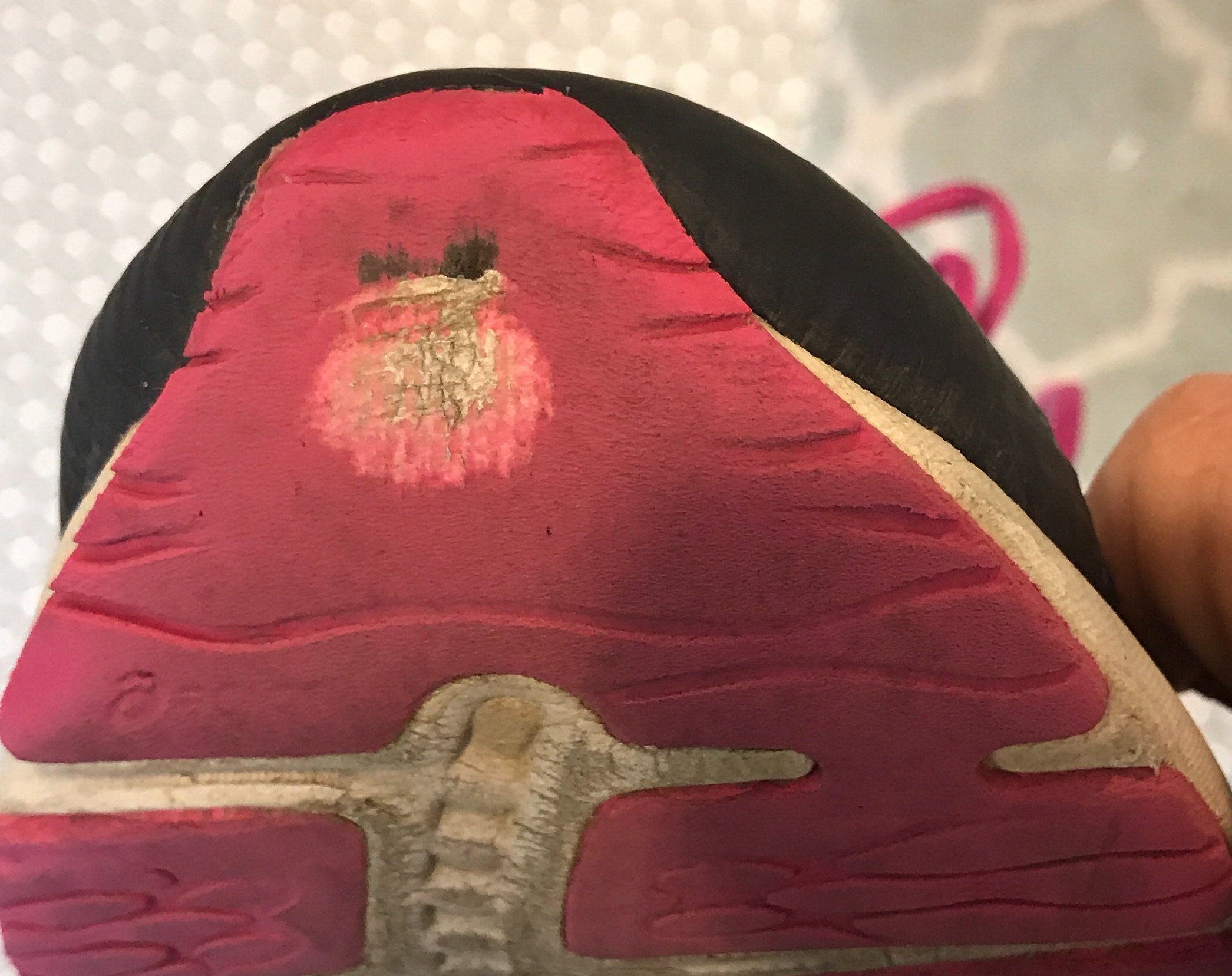 That’s some major wear in the toe!

I think it paying off! So back to the shoes. The shoes that I wore in my Boston Qualifying Mountains 2 Beach Marathon (pre-treatment, and strength emphasis) are here. It’s obvious from the wear pattern in the toe that I was barely getting my foot off the ground. I surprised I was even running. 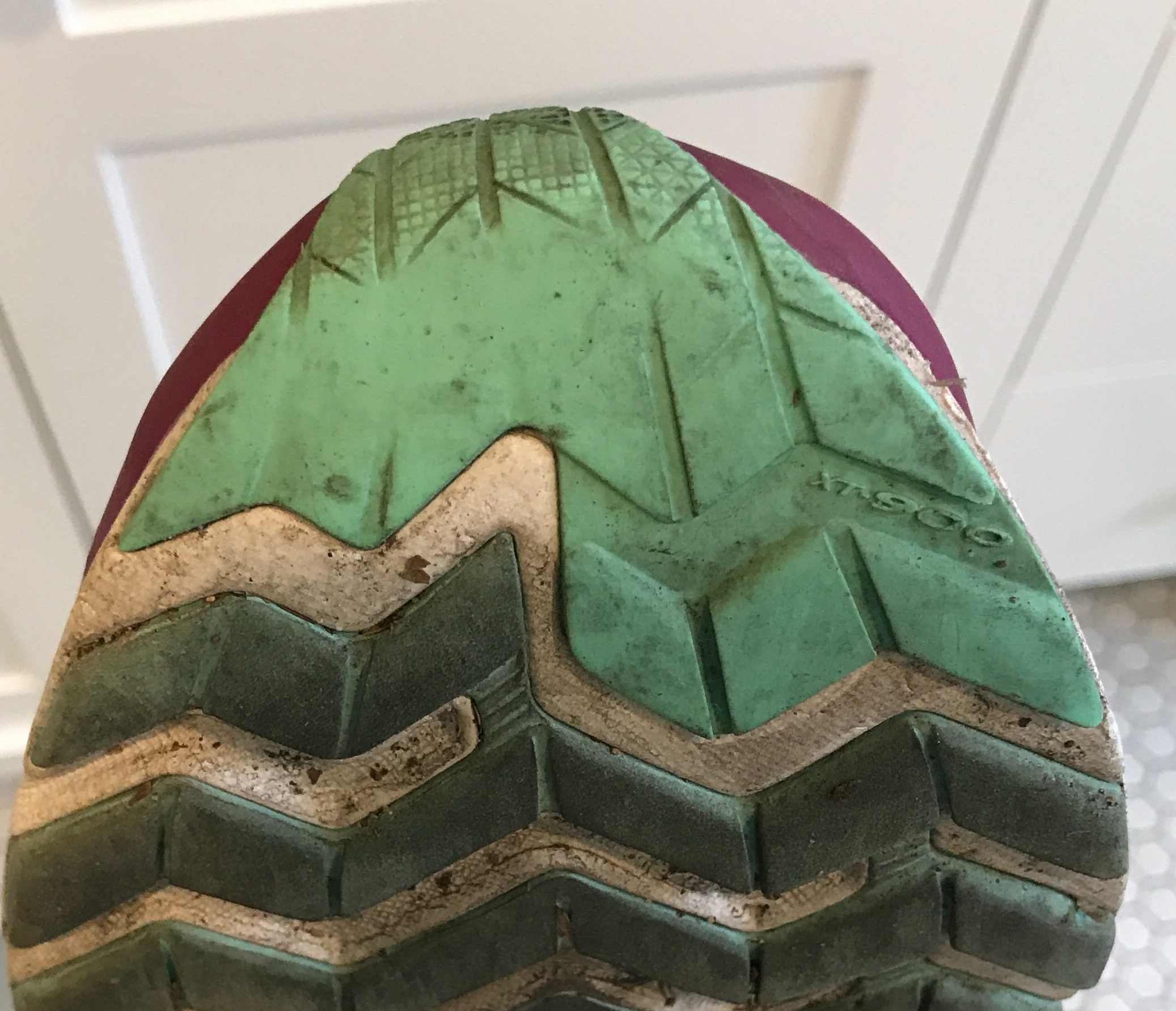 Dirty shoes! But not nearly as worn out as the last pair. This is with 380 miles.

But look at the shoes that replaced those. These shoes have more miles on them and a much improved wear pattern on the toe. Yeah!
The lesson is to seek help more quickly. And if the first person you ask doesn’t really address your concerns, keep seeking help. Because the problem will not magically go away. I could add that there are some great podcasts out there for runners!
One last comment for the week. I talked to my coach about the training I missed from being sick and he’s optimistic. He said that if this were my first marathon, he’d be worried. But it’s not my first, it’s my eighth, and all that other marathon experience counts!
Just 5 more weeks!
Here’s my training for the last week:
Final Surge – Print Workouts
nlswitz@me.com2018-03-12T17:14:16-07:00