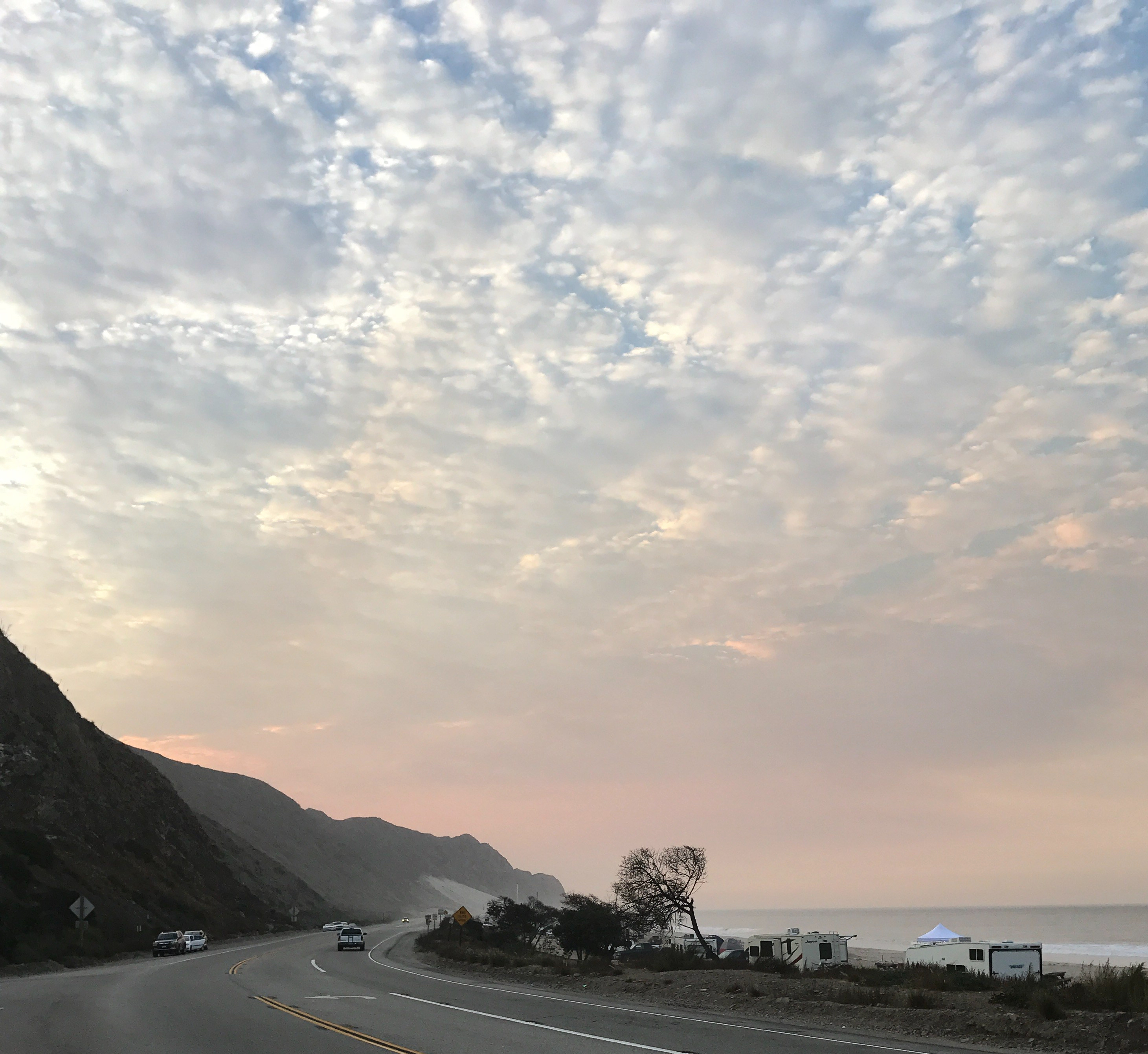 The view before we started to the trail. There’s a major fire in the hills east of Los Angeles and I’m pretty sure there’s some smoke with those clouds.

My husband (Scott) and I decided to do our long run today, 12 miles, on part of the Ray Miller Race (Dec 2) course. It’s probably more accurate to say that he’s a good sport and agreed to go with me. We left the house early to beat the heat, and started running at 7:02. It was 72°, which doesn’t sound too bad except that the humidity was 78%. It would just get hotter! I don’t know how hot as I didn’t check during our run. 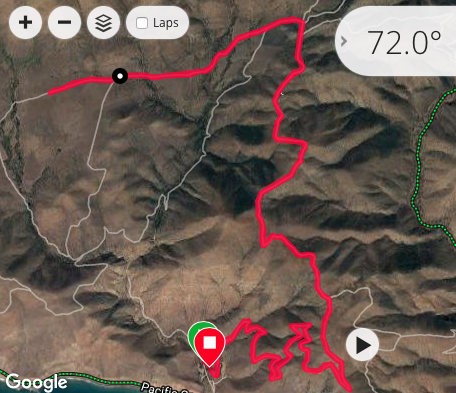 My goal was to run an easy effort. I’ve learned that the best way for me to do this is to run by heart rate. Based on my max, my easy effort target is from 130-140. On flat, paved runs I try to stay at or just below 130. With this goal, today’s run was a true run/walk as I walked whenever I got to or above 140. I ended up walking a lot.
So how’d it go? When we were done I told Scott, “that was fun and that sucked.” It was both. Sometimes life is about finding the enjoyment in the difficulty. That was certainly the case today.
Before we actually started running, we were attacked by a swarm of mosquitos. I’ve never experienced this here and will need to make sure I have some bug spray for next time. When I tried to do some leg swings, I was suddenly so covered with these bugs that I contemplated going home! But we carried on! 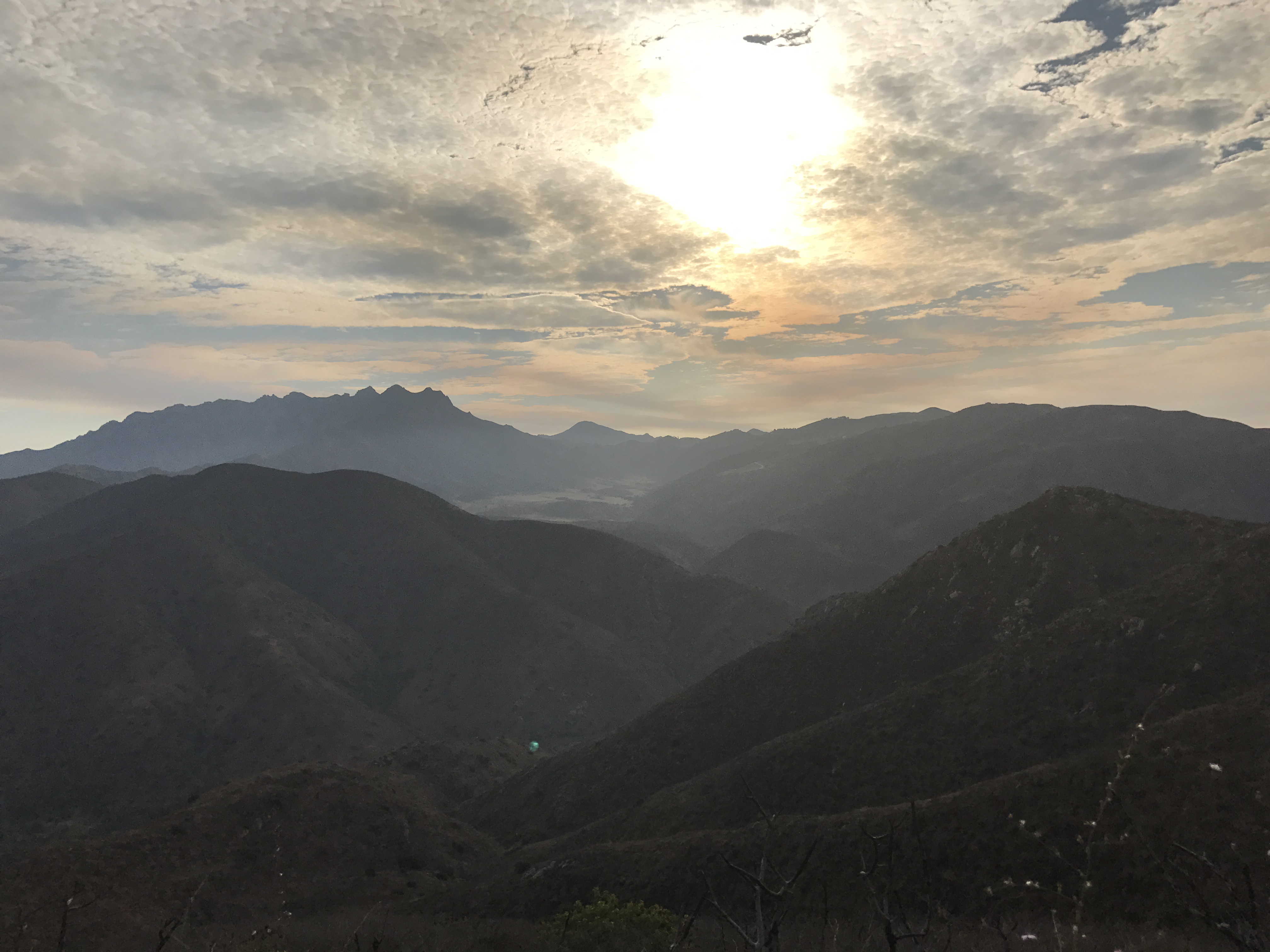 The first 5 miles were pretty nice. For mile 6 we were on a very overgrown trail…and I was nervous. When something big scampered under some brush, I jumped when I heard it and caused Scott to jump. It was probably a big lizard (there were many small lizards). I was  hoping we wouldn’t encounter a snake and told Scott, “I’m again rethinking my life choices.” 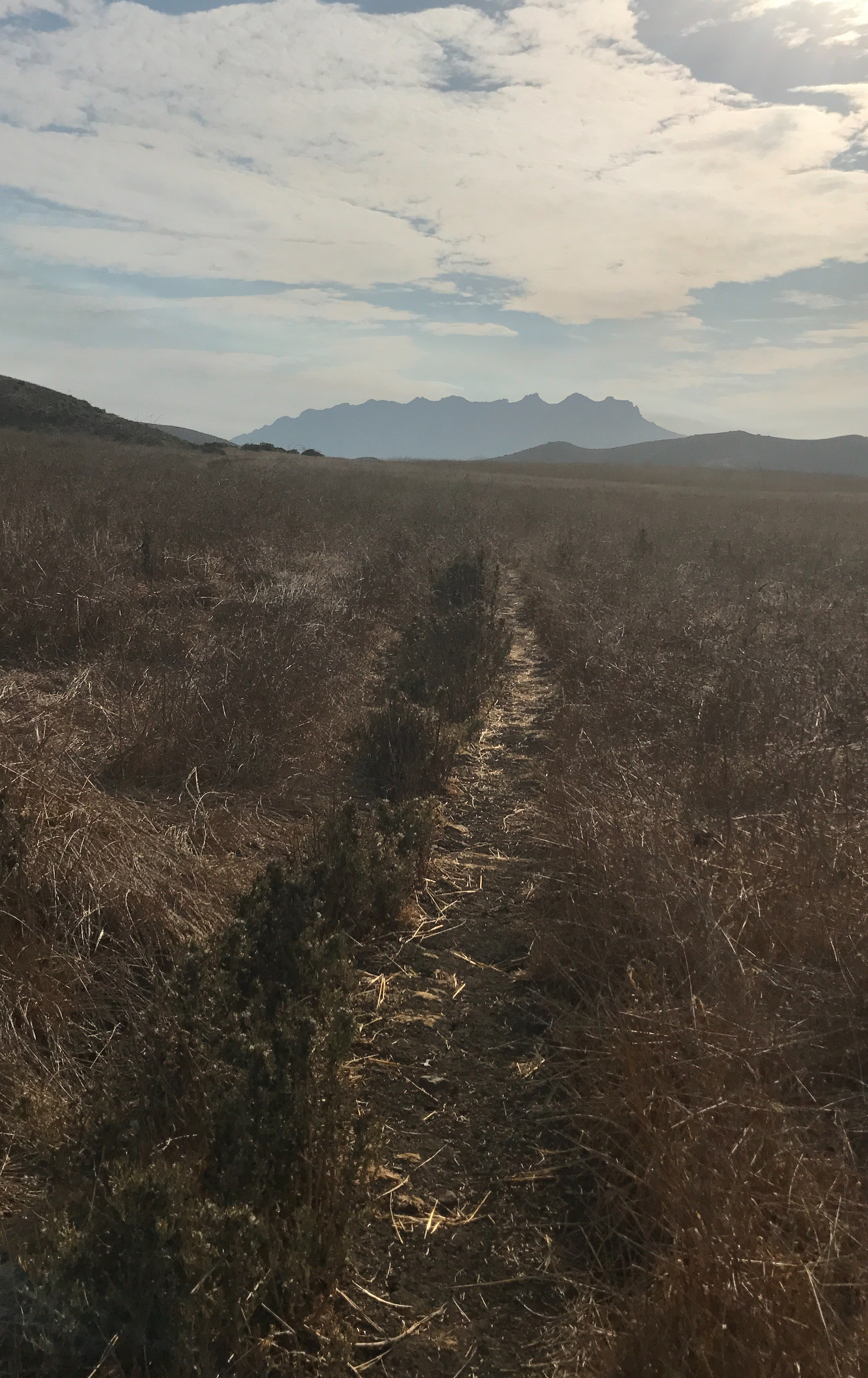 I seriously didn’t like this part of the trail.

Once I had signed up for the Ray Miller 50k, I realized that I would be training on the trails during the hottest time of the year. I’m afraid of things that slither and thus in all my years have never chosen to hike in the heat. This is not exactly rational…so not only am I now training for my first 50k, I’m also working to conquer this particular fear. Anyway, we made it to the turnaround with no mishaps.
Turning around though was hard. We were now going mostly uphill into the sun. It was hot! Thankfully I had enough water (in a backpack), but what I really needed was some water to pour over my head. Mile 7 wasn’t too bad, but mile 8 became a walk more than run as I slogged uphill. I was hot hot hot and even contemplated removing my backpack and dumping its water over my head (I did do this when I was done). Sometimes my heart rate was above 140 just walking. I have some serious work to do on these trails! 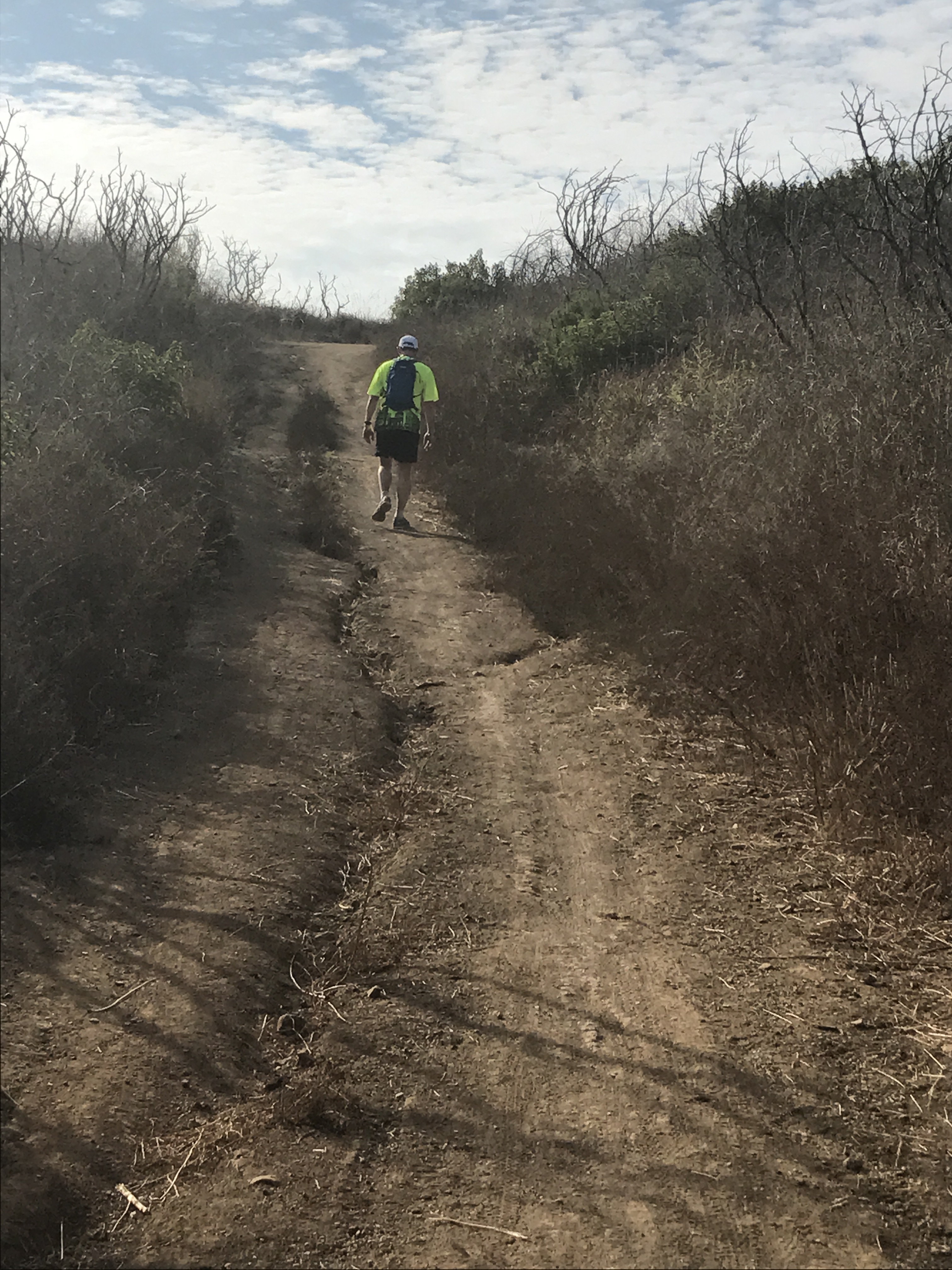 I took this picture one of the times I started to catch up. By the end he was WAY ahead of me.

Scott got so far ahead that he doubled back to make sure I was ok. He’s really good at this trail running! I’m trying to convince him to sign up for the 30k. Next year he’s going to try his first marathon…so this would be a great next step! And he’d totally rock it.
The good parts of the run: the gorgeous scenery; the friendly people met along the way; and the fact that as hard as this was I was able to get in some good training…and my average heart rate was 135. And I didn’t fall…that’s progress!
Here’s some data: 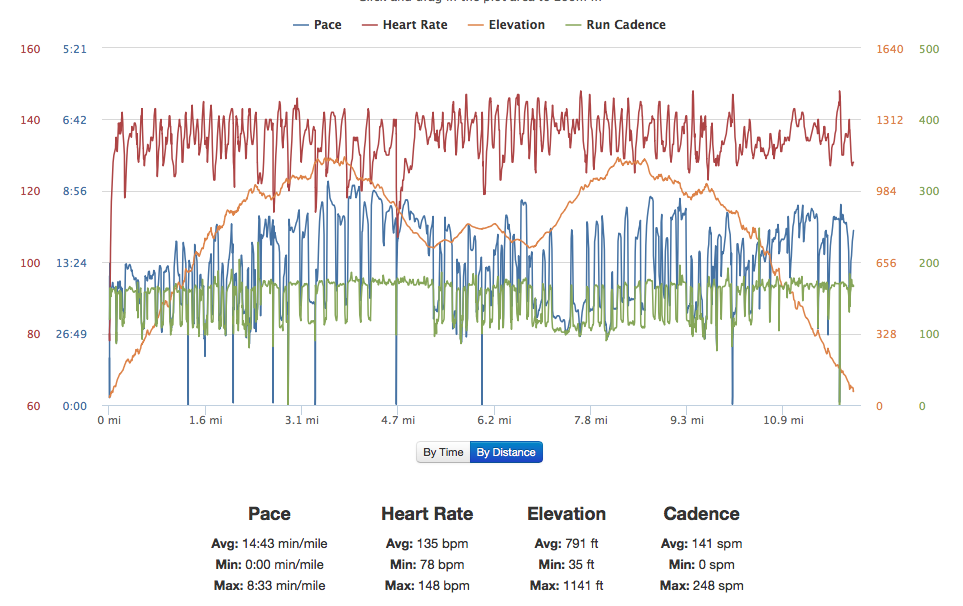