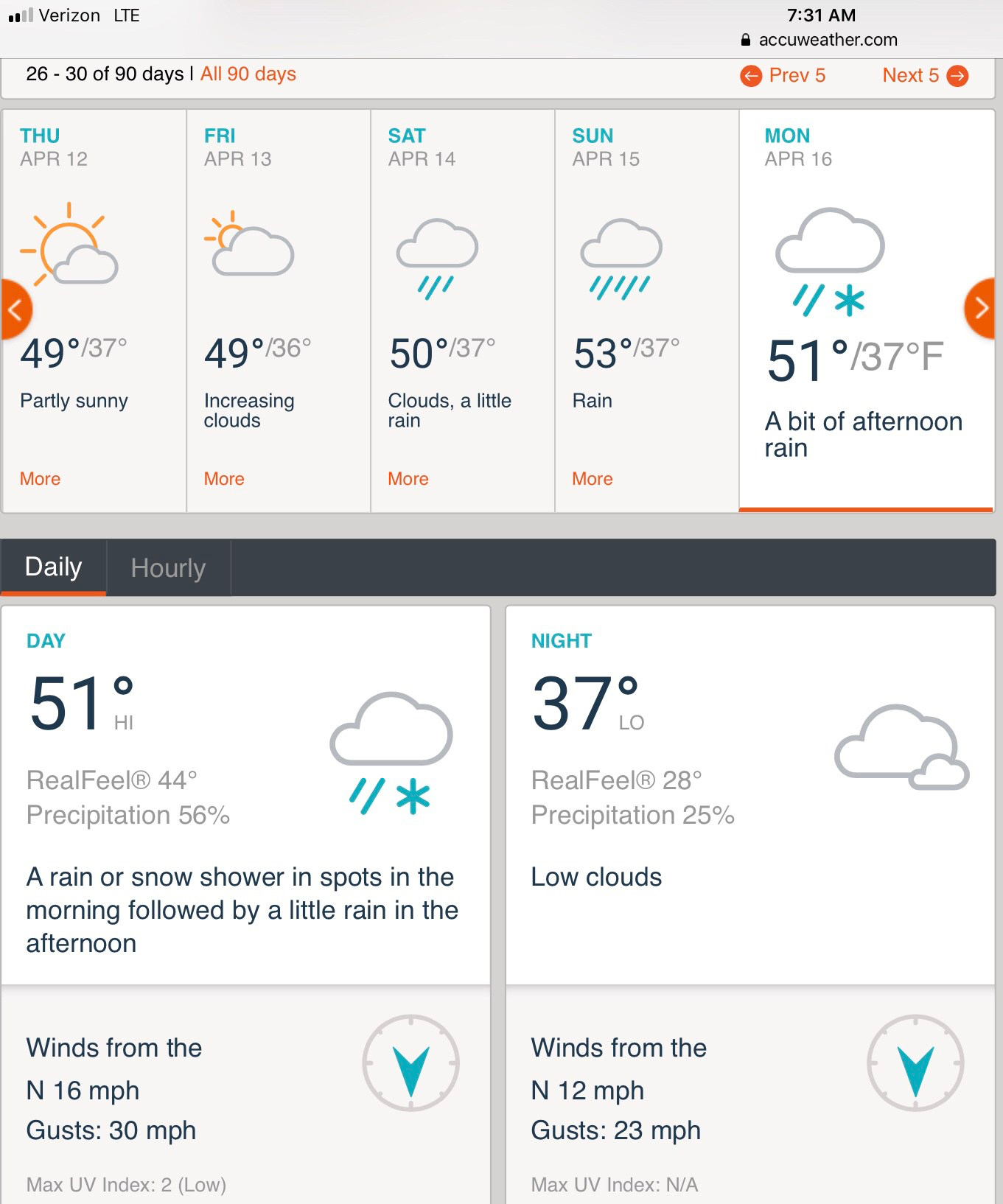 The March 18 forecast ended up being pretty close. 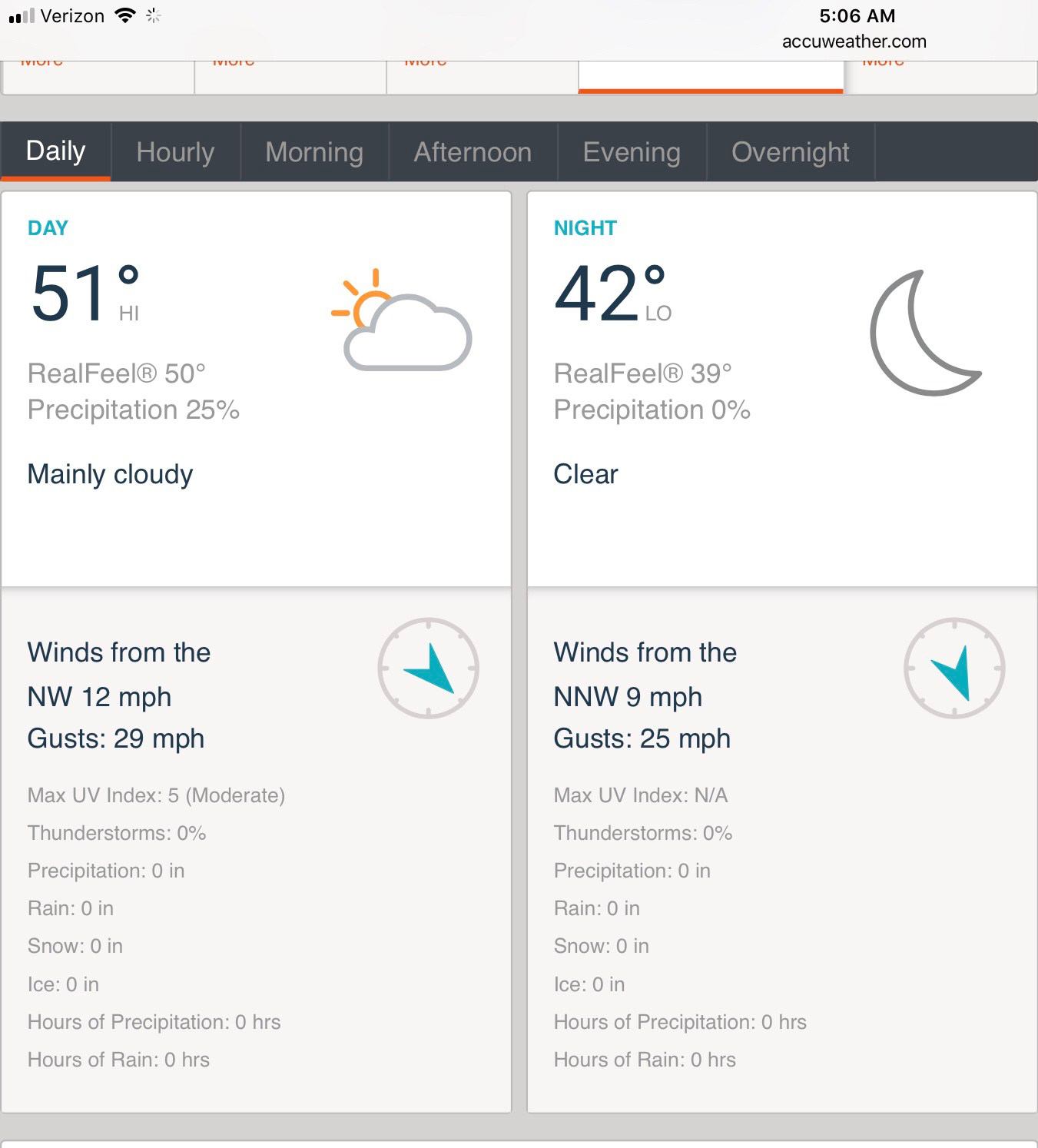 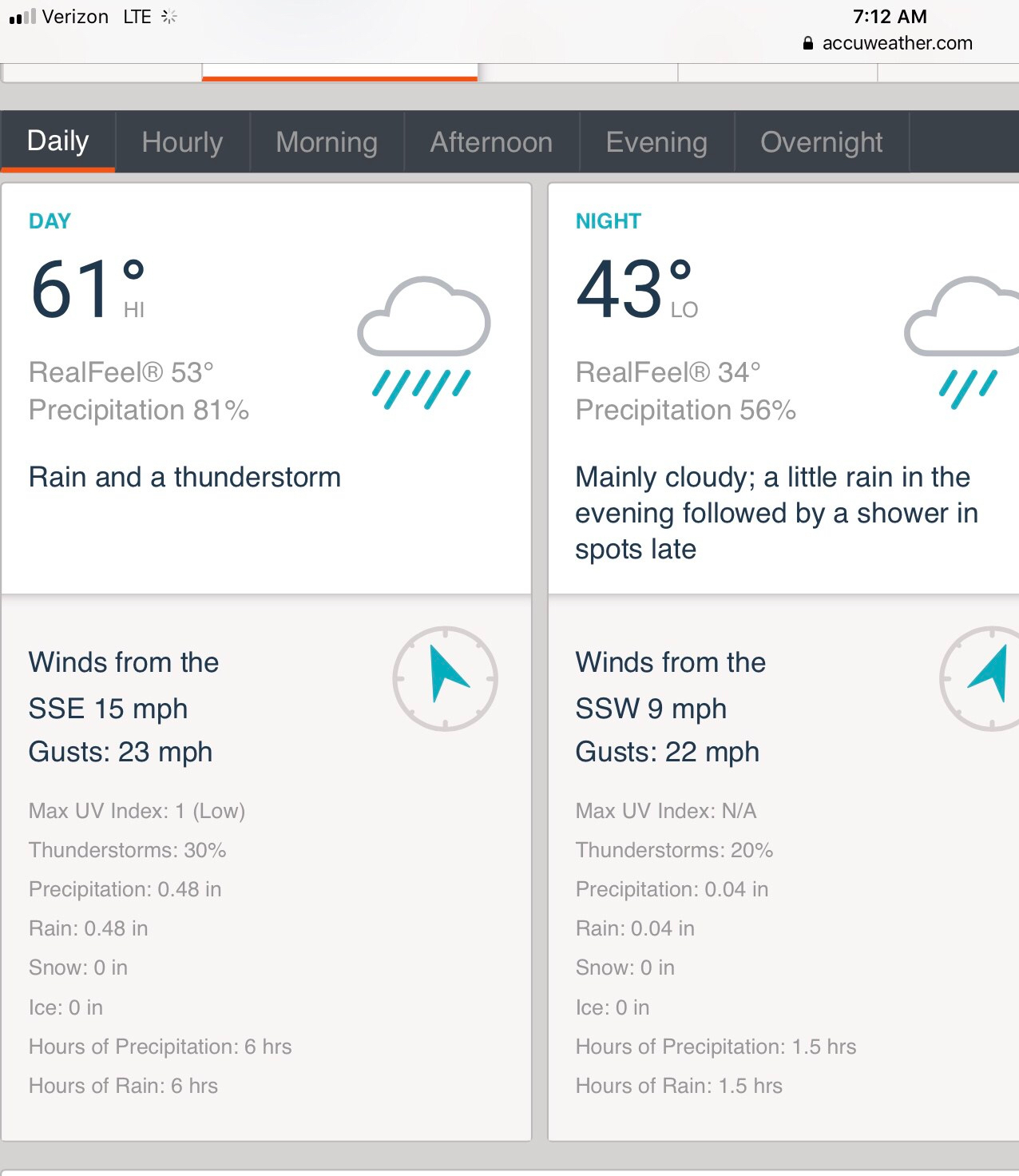 April 10…close but it was colder and windier on race day.

Before the race
Like many runners I obsessively watched the weather reports in the days (even weeks) leading up to the race. For a few glorious days the forecast was for mid 50s and partly cloudy. This would have been wonderful. Would have been! Ha!
A week before the big day everything changed. Rain…cold…wind. I realized I didn’t have the right clothing for such a race. In reading various running web pages, and asking my coach, I discovered that I would need tight fitting clothing. This so that the fabric doesn’t become rain soaked and heavier.
I had leggings but no tight long sleeved shirt. I also couldn’t find one on the Wednesday before we left. Josh (my coach) suggested I try a rash guard. At REI I found a tight fitting, long sleeved, rowing/paddling shirt. And… it was only $40. Although I balked at spending $99 for a Patagonia rain/wind jacket.
We arrived in Boston on Thursday (my birthday). Friday and Saturday were chilly but beautiful. I bought gloves (lightweight) at the expo and a buff at a running store. The buff was for warm weather but I figured it was better than nothing. I planned to wear it with a hat.
As I obsessively watched the weather, it just seemed to be the worse case. Rain, with one forecaster saying “car wash levels.” A headwind of 25-35 mph with occasional gusts up to 50mph. HEADWIND! 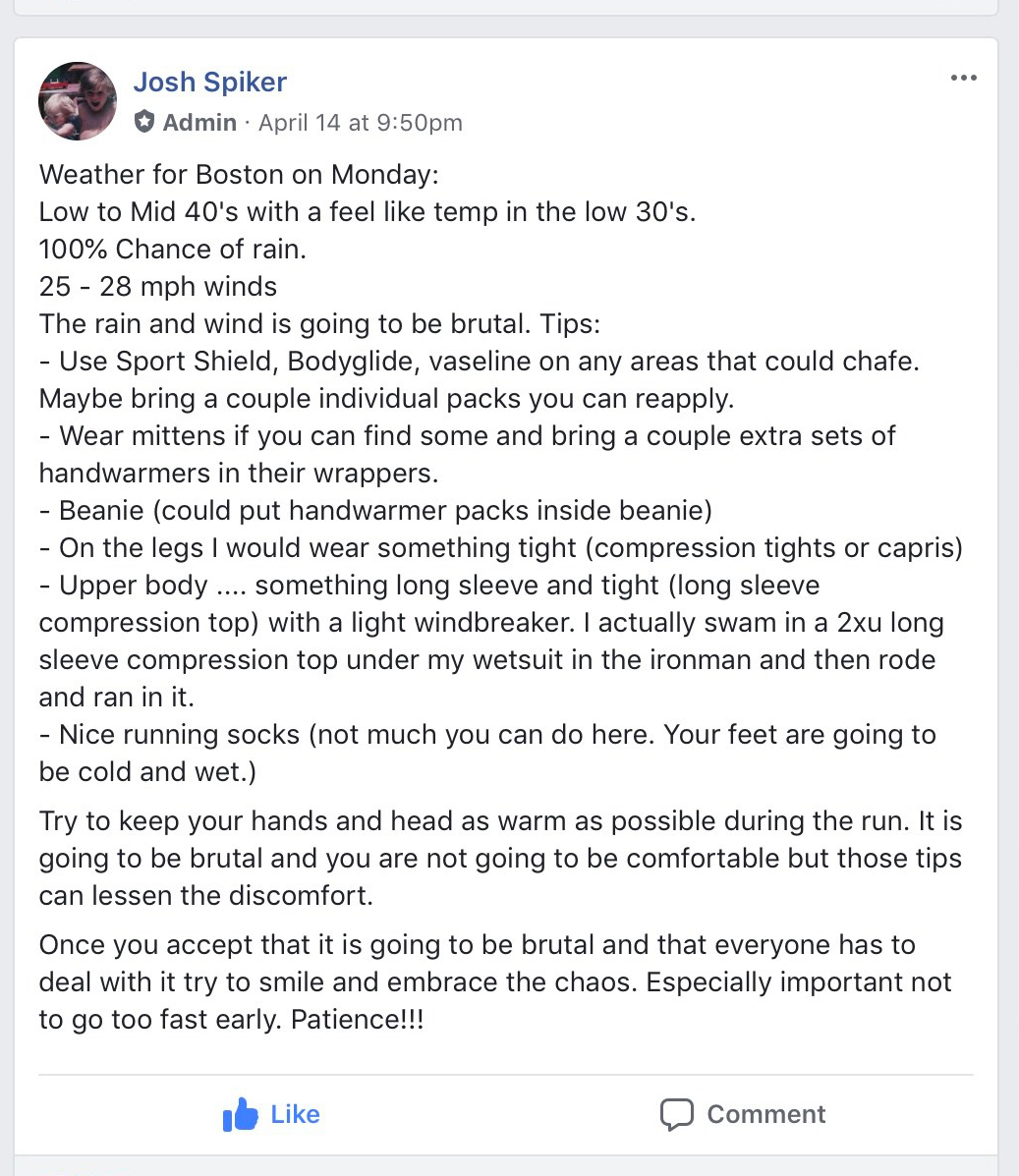 Some good pre-race advice from my coach!

I sent my coach a message, “should I wear two pairs of leggings for the cold?” I think he looked at the forecast for race day after my message and then posted a message on our club page with advice for all of us who were running. The take away for me? Keep my feet dry as long as possible. Try as hard as I can to keep my hands and head warm.
Saturday night I figured I wasn’t prepared…should have bought that Patagonia jacket! Scott (my husband) checked for me and found that the Boston REI was walking distance from our hotel. Yeah! We decided to get there when they opened on Sunday, thinking that we wouldn’t be the only ones in search of foul weather wear. 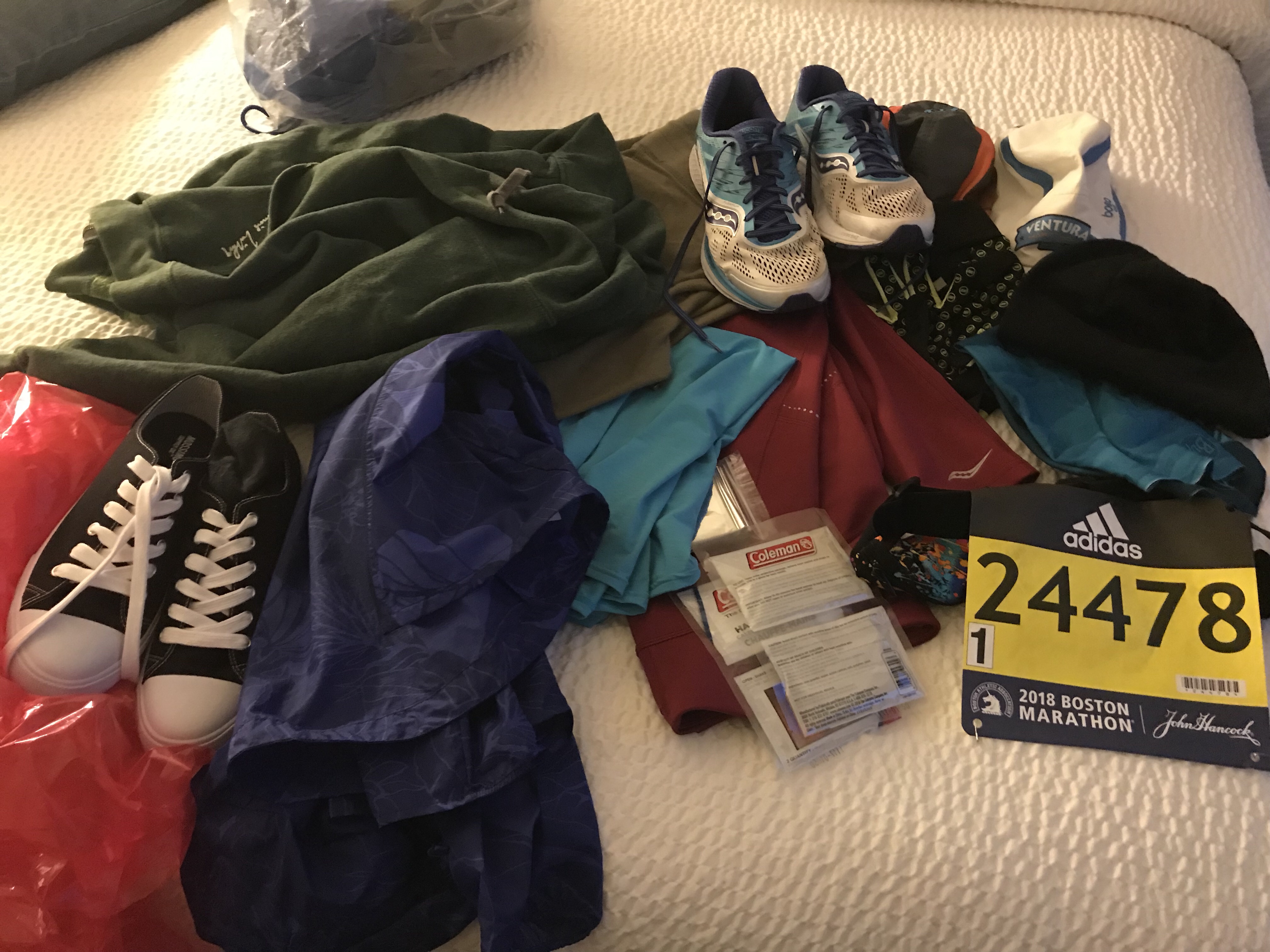 Everything I would be wearing or carrying the next morning. Except the hats (one to wear and one to change when I saw my family. I decided that with the wind, my hat would probably just blow away.

Arriving just after opening, the store was busy. I found the $99 Patagonia jacket. Yeah! We then joined other runners and spectators rummaging through the sale bins for other supplies. I found a beanie and Matt (my son) found a buff that was for cold weather. I had just about all that I could get!
One more thing…Scott went to Target and bought me a $14 pair of Converse knock-offs. Now to excitedly-nervously await race time. I no longer had a time goal but rather my goals were to finish and not to slouch or bend my upper body into the wind and rain.
nlswitz@me.com2018-04-18T05:41:12-07:00