Megan and me pre-race. It was cold before the start. I bought this shirt in honor of those who were marching last Saturday…maybe the cotton cause the chaffing at my bra strap…

Just three weeks until the Boston Marathon! It’s hard to believe that I was vacationing in Boston at this time three years ago. I was inspired by all the Boston Marathon stuff we were seeing. It was everywhere. Although I wanted to someday come back and run this prestigious race, it was a very remote possibility. Six months earlier I’d run my first marathon in 5:51:02. I’d need to shave lots of time off that effort! Two years later I qualified with at 4:04:49. (That’s a goal!)
It’s hard to believe that the race is here!
Last week’s training included a half marathon, The Great Race, Pacific Half. All I can say about this race is that it was HARD! I thought I’d do better and I have mixed feelings about the race (comments are in my training log below). Now that I’ve had a few days to

More up than down in this race

think about it, I’m a bit happier with the effort. I did think that all the hills I’ve been running in training would have helped me more. But then maybe they did as I was able to finish 5 of 82 in my age group.
One very cool part of Saturday’s race is that I’ve been coaching a member of my church towards her first half marathon. She’d run previously, re-started last summer, and learned very quickly that you cannot just pick up where you left off. With her hard work and my guidance, she was able to complete this race…and it was harder than intended because she’d signed up for an easier trail run that had been cancelled due to weather. 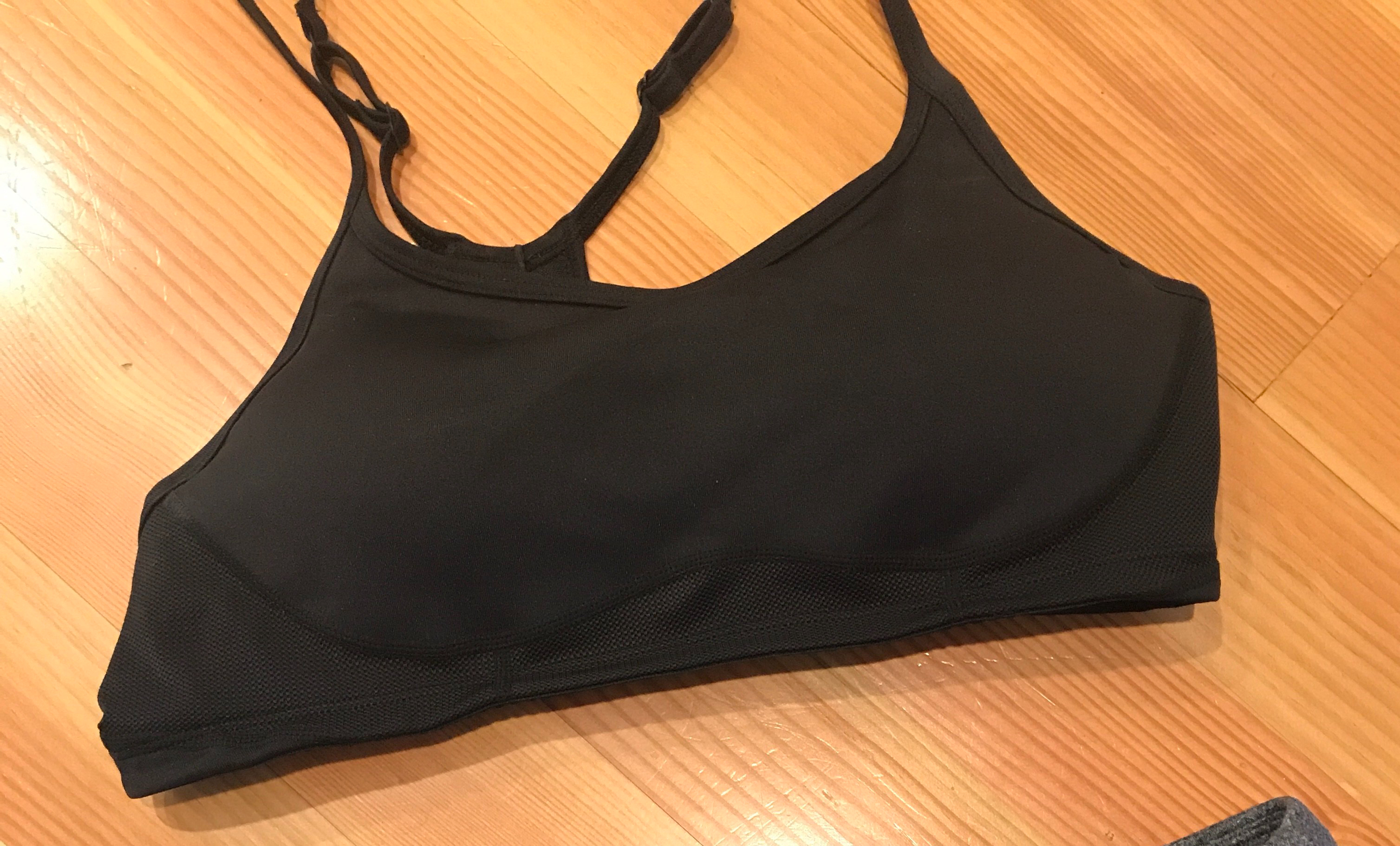 Cute bra…won’t be wearing it in Boston!

Track today instead of tomorrow. Total run felt good, but while I was running my cool down I thought the workout seemed shorter than usual. That’s when I realized I forgot to do the strides. Whoops 😬

Planned: 1 mi
Completed: 1 mi ~ 10:50 (10:50 min/mi)
Run – Hills & Strides
Strides X 4  Missed the strides!
To Be Completed right after you finish your run.
* Strides are medium-hard to hard efforts roughly 20 seconds each or 100 meters long (a straightaway in a track) where you focus on quick turnover. They are a harder effort but not all out sprints.
Take roughly 45 seconds rest between each stride (rest can be walking around or a very light jog.)
7:43 AM
Good

Nancy Switzler
I have very mixed feelings about this race. I had hoped I would do better, especially as I’ve been doing so much hill training. I think I could have dug a bit deeper the last three miles.
I’m wondering how much anxiety may have affected me. Just as we were starting I missed a call from our preschool director. That was odd and I thought maybe something was happening at the church/school. Then while going up the big hill I got notification of a missed call from an unidentified number. Then our youth minster. At the bottom of the hill I got notification of a missed call from our secretary. Did the church burn down?
I almost stopped when I was running past the starting area, but decided that I wouldn’t be able to leave anyway (and strand my family) so I kept going and called at the finish.
This should have made me run faster but instead the dread made running harder. When I finished I called and learned that our preschool director’s son, who joined the Marines last week, was in ICU in San Diego. Stopping would not have changed anything but I wish a fire had been the actual emergency.
After the race it was great to see friends. I also was able to walk back the last half mile of the race and find my church member who I’d been coaching. Megan and I ran her in…my first experience coaching someone from not running to completing a very hard course!
As we left we checked the results and I was 5 of 82, meeting a goal.